Despite the fact that there’s a well-known link between vaccines and Calvinsim, earlier this month L. went in for a booster shot.  This was not a regular well-visit.  It was just come in, get jabbed, go home.

Still, the pediatrician came into the exam room and did a once-over to make sure the girl was healthy before giving the shot.  Eyes, ears, nose, mouth, lungs, heart.

It was all pleasant chit-chat until the stethoscope came out.

I quieted down so the doctor could listen, and the listening grew more and more intense.  She asked to L. to lie down, and did all the possible angles with that stethoscope.

And then she said she was referring us for an echo.  “Sounds similar to a common benign murmur that occurs at her age, but I think it’s a little bit more pronunced than it should be.  We should take a look.”

Okay.  No big deal.  The referral went into the black hole of office bureacracy, and honestly the chief reason I got on the stick and made administrators get an appointment time pinned down was because the kid wanted a clean bill of health for sport camp.

The echo tech told us she’d do the ultrasound, and later in the day a cardiologist would look over the files.  He’d send a note to the pediatrician, and she could follow up with us if need be.

I watched with interest, but also with the confident ignorance of people who have seen enough ultrasounds to know that the shapes on the screen don’t look like the pictures in the textbook.

And then as she wrapped up, the echo tech said, “I’m just going to go speak to the doctor now and have him look at this.”

That was when I knew things were up.

So one thing that kept grabbing my eye during the echo was a pulsing ball at the middle of the screen.  It looked kinda like a ping-pong ball bobbing in a lake.  I told myself it was probably a weird view of some body part being caught at just the wrong angle.  It was inconceivable to me that it might actually be a pulsing ball of . . . something.

Here’s a picture of the human heart, not drawn to scale: 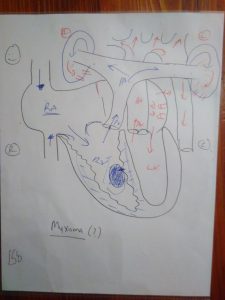 At the bottom in blue is the right ventricle.  One does not store a blue ping-pong ball in one’s ventricle.

But there it is, a probable myxoma, extremely rare for a young teen, extremely rare in this location.  For various reasons, most of them called you do not want a pulmonary embolism, out it must go.

We were not expecting this.  We were expecting to be told someone’s valves were going through a growth spurt and would be ship-shape again in due time.

We were not expecting: Please keep your heart rate down until we can open your chest in a couple days and get this thing out.

She’s a good Catholic all around.

There’s something else about expectations that happened.

When the cardiologist came in, he joked around a bit.  He had a little banter about no boyfriends until you finish grad school, and later: Don’t be an orthodontist kid, be a surgeon!  It was all couched in the expectation that of course you’ll go to grad school.  He was the good dad of jocular firmness, the kind that cracks terrible puns and grounds you until your homework is done.

I don’t know if he plans that talk or it’s just how he is.

Here’s what he knew about our kid before he walked in the room: She was referred from the pediatrician who works at the non-profit clinic in the ‘hood, and she needed open-heart surgery.

Kids in either of those situations can feel like they don’t have much of a future.

In two minutes of joking, he communicated this: You have a future! You’re gonna do great things!

God provides.  If the appointment referral hadn’t fallen into the black hole, we would have had all this information two weeks earlier.  Because there was a delay — a delay that has done no harm, even though it could have — we are hitting just exactly the moment on the calendar when we have a maximum of support through a tough week, and exactly the right amount of time to get through extended recovery before school starts.

Also, the hospital the cardiologist wants to work with lets you order your own meals, and there’s food the kid likes on that menu.

I couldn’t have expected any of this.  But the silver lining is so bright right now it’ll make your eyes water.