Thanks once again to our host Larry D. at Acts of the Apostasy, whose plan for internet domination will no doubt culminate in underground bunkers.  Every indication the  Alvin- and-Chipmunks warning is not an idle threat.

Double FYI: No, I am not planning to cook all this.  I just like thinking about these things.  My 9-year-old has baked some cookies, though.  That’s a step up from last year, in terms of our ratio of homemade-to-store-bought Christmas foods.  Thank you  nice religious ed family who sent the mason jar of cranberry cookie mix.

Oh, and look what my DRE gave me (and all the other catechists, I’m pretty sure) for Christmas: 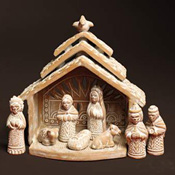 Mine is not this exact one. Mine is smaller and has just the Holy Family, and the stable is an arch shape.  But it’s from the same project and very similar. It looks super cool.  Maybe I could get some photographer guy I know to take a picture.

If five-year-olds had to choose their vocations:

The boy who makes her play army all day still doesn’t like girls, either.  Except when he can get one to run around the yard brandishing weapons.   In eight years I will have four teenagers.  Seriously enjoying the easy years.

SuperHusband points out that hunting season only lasts two more weeks.  During which he will be designing and building shelving for the living room.  Not shooting things, and maybe his friends won’t be shooting things either?  Maybe the dog does not need her own stock pot from Santa after all?  Also, maybe my living room will not have the “Tornado Strikes Shed, Library, Toy Store, and Art Museum, Deposits Contents in Suburban Home” look?

Okay, no, let’s not overreach.  But at least I’ll be out of excuses.  That’s a start.

. . . they said she had torticollis.  In a five-year-old?  I’d only heard about the newborn kind.  I had no idea about the sort that makes a small, non-complaining, previously perfectly happy (if resistant to bedtime)  child suddenly start moaning and kicking her feet in intense, intractable pain.  The worst of it lasted through the night, and it took nearly a week of Rapunzel Therapy to effect a complete cure.  But she’s good now.  Next time we’ll know what it is.

Remember last week when I mentioned a vague specific prayer need?  This week, pick your favorite saint-who-suffered-slander-from-enemies, and ask for a little assistance on that same job.   Thanks.  Have a great week!