Alsace is addictive because you can go just about anywhere and find village scenery like this: 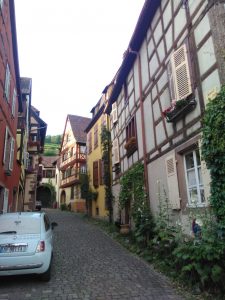 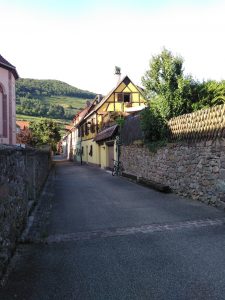 If the buildings themselves lack panache, the locals add flowers and art until it meets spec. Here’s a house that’s a bit on the vivid side, even for Alsace, but you begin to get the point: 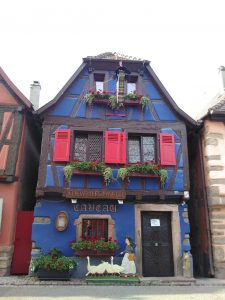 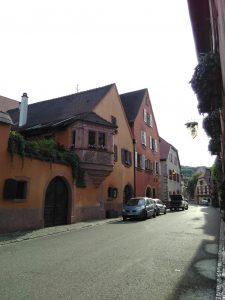 When you want to communicate the one most important thing: 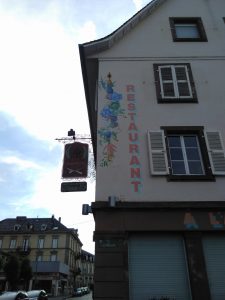 Here’s the protestant church in Munster (the place where the cheese comes from), from the late 19th century. Front facade: 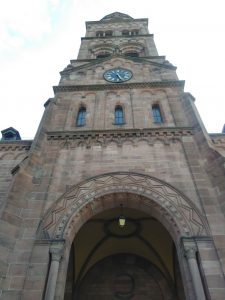 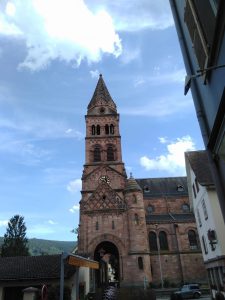 Neither of these photos does justice to how captivating the exterior of this building is.  (Unfortunately, the inside is so depressing I couldn’t bring myself to photograph it, out of embarrassment for the perfectly nice people who inhabit the place.)

This is the (Catholic) church in Uffholtz, early 20th century: 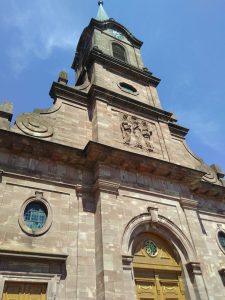 None of the Catholic churches I’ve seen are depressing inside.  Often eclectic, never mortifying.  That’s pretty good, for Catholics.

Hey, look, have a castle: 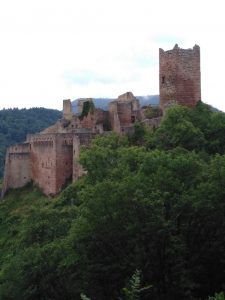 These things are all over the place, in the hills along the length of the region.  We eventually got to where we’d hiked up to enough of them that we were able to drive by a new one without stopping.

Food photo: Alsatian specialties on offer at the astonishingly good and not-that-expensive-for-what-you-get La Mercerie in Obernai. If you don’t like meat and potatoes, this might not be the region for you. 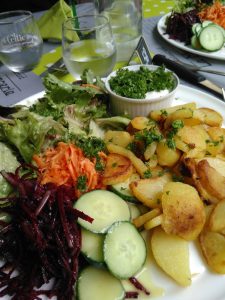 Lifestyle pic: View from our living room window in Sigolsheim.  The entire village was rebuilt after WWII (more on that in another post), though the church you see here was not flattened (unlike everything else), so the basic structure is medieval-or-so. 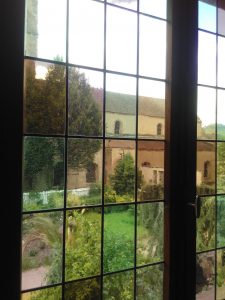 I’m making one exception to the No Museum Photos rule for this post to give you a roof detail: 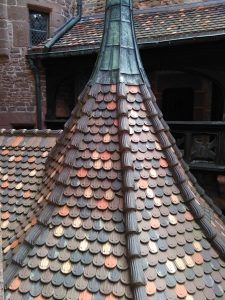 The photo (above) is from Haut Koenisgbourg castle, where it’s possible to get this close to a typical roof.  You can see below the colored tile in the building in the background of this combination traditional-contemporary village church in . . . gosh I forget, some village we drove through a bunch: 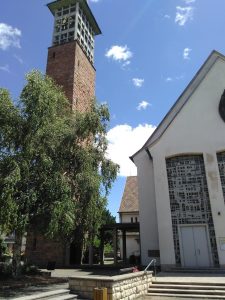 The traditional village structure of the landscape is aggressively preserved throughout the region, which is overwhelmingly agricultural.  On the valley floor are wheat, corn, and other field crops, and the slopes are for vinyards or hops.  The mountains are mostly forested.  Cows are around here and there in the valley and in the mountains.

Here are cows in a pasture near Le Grand Ballon, the highest point in the Vosges.  Turn up your volume to appreciate the cowbells, which are the point of the recording.  The other sound you hear is the wind:

Here’s a panorama of Sigolsheim, a village outside of Colmar, which gives you the model for what the entire region looks like. 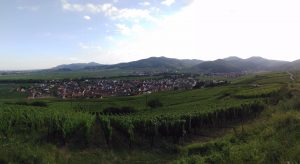 And a detail on the village.  Like I said, best place in the world. 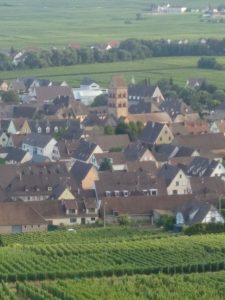 Though now I kinda wouldn’t mind moving to Chamonix, either.