A hot newish thing in scientific research is combining human and animal genetic material in order to do something-or-another.  Here’s a quick rundown of the moral issues involved, including “What if there were Cat-People?”

Principle #1: If it directly kills an innocent person, don’t do it.  Some of the procedures under scrutiny involve removing genetic material from human embryos (for whatever purpose, noble or otherwise), and thus killing the embryo in the process.  A human embryo is a human being.  A very tiny, very young, very immature human being, but a distinct human person all the same.  Just because your friends can’t drive or hold down steady jobs doesn’t mean they’re disposable.

Don’t kill the innocent humans.  That’s a hard-and-fast rule.  Therefore, any procedure that requires the direct killing of any innocent person is a no-go. Always and everywhere.

Principle #2: Human beings have eternal souls. Now let us imagine you acquired your human genetic material through some moral means.  A question that then arises is: Does our use of that human body-part cause a new human being to enter into existence?

We have situations in which no such thing happens.  You can donate your kidney and liver and heart and all kinds of stuff to some other person, and the recipient remains one person, the same person as before, and you remain the other. (You might be dead, but you’re still you.)  No new human is created via organ donation.  We can conceive of situations in which the use of human genetic material works in a similar way — the donated body part does what it does, but it doesn’t cause a new human person to come into existence.   In such a case, as long as other criteria for moral action are met, there’s not a problem.

We have, likewise, situations in which the pro-creation of a new human person does or could happen.  It is not necessary for us to analyze the state of science at this very moment.  All we need to know is that if a new human being is made via cloning, genetic donation, or what have you, we’ve violated a moral law.  It is immoral to procreate outside the bonds of marriage.  But, like all the other immoral ways people procreate, we also know that every human person is endowed with inherent dignity that comes from being an eternal soul created in the image and likeness of God — regardless of the circumstances of conception.

Therefore, though it is patently wrong to create new humans via cloning, IVF, rape, adultery, and whatever else science might devise other than the marital act, the new humans so-created still must be treated with all the same rights and privileges the rest of humanity is owed.

Principle #3: When in doubt, err on the side of protecting the sanctity of human life.  People are stupid, though, and sometimes evil. We can envision, therefore, some dreadful situation in which scientists create part-animal-part-human hybrids.  Is this new creature a human being?

Well, that would be hard to know, wouldn’t it?

We could be quite certain that if, say, you donated a human lung to a pig, the pig is still a pig.  We know that because that’s how it works when you donate a human lung to a human.  The recipient remains what and who the recipient always was.  There are moral problems with donating human tissue to animals, for example: Why was a perfectly good human lung wasted on a pig?  Those issues must be dealt with, but they are different from the question of whether the pig just became a human person. The pig is still a pig.  Not one you want to barbecue, though.  Ick.

In contrast, let’s say we created an embryo in-vitro (don’t do that, it’s wrong), but rather than using 100% human genetic material, we used some portion of non-human tissue as well.  The resulting being might be obviously “human” or might not be.  But here’s the rub: You could not count on appearances alone to know whether you had a human person.  Does it look mostly like a human, but really it’s a dog-soul animating a modified dog-body, more like the animal recipient of human organs?  Or, in contrast, does it look mostly like a dog, and lack many of the characteristics we take for granted as being “human” but in fact it’s a human soul animating a damaged human body?

It is quite probable that we might find ourselves in the situation of having to say: Who knows?

And in that situation, the moral response is to assume it’s a human person until proven otherwise.

Should you create human-animal hybrid creatures? No!  You shouldn’t be procreating humans in the laboratory at all, unless it’s you and your spouse up late going at it the old fashioned way.  But in the event that hybrid-creatures are produced, we would be obliged to treat them as if they were human, no matter how miserably inconvenient that turned out to be. 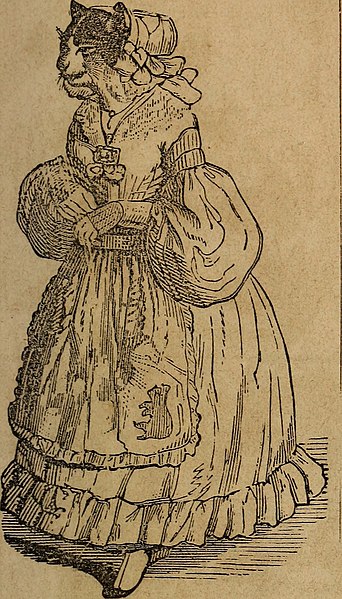 Artwork: The Ball of Yarn (1854) by Internet Archive Book Images [No restrictions], via Wikimedia Commons