Ooh I’m so excited.  Look what I got today: 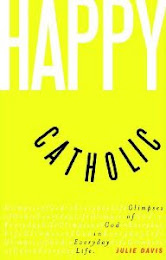 Walked into church this morning feeling a little rumpled and not quite myself, and who had set up shop in the narthex? My favorite local catholic bookstore.  Which is sort of like running into the ice cream truck, Santa Claus and your best friend all at once.  Happy happy.  Tons of cool stuff on display, but I had to stop looking after I spotted Manalive and Julie Davis’s book.  Doesn’t do to spend too much on books when the spouse is so very nearby.

So, about the book. (Happy Catholic’s — not the other one by the other happy catholic, because I haven’t read it yet, plus probably you have):

Apparently I have this secret fear that my favorite internet authors will write bad books.  I thought Eric Sammon’s book would be too hard for me, because he is so much smarter than me.  Not so.  I was sort of nervous about Julie Davis’s Happy Catholic book for the same reason.

I was double nervous about the Happy Catholic book because it is inspirational. And sometimes inspirational-genre books have heart-warming stories about boys named Johnny who teach their parents important lessons about The True Meaning of Christmas, and then the mother dog who sacrifices her life to save the puppies and three orphaned children . . . you know what I mean.  One takes ones chances.

Julie, on the other hand, tackles questions like: Why does Han Solo deserve our attention?  How shall we rank Oprah, Miss Manners, and Jesus?  And is it possible Monty Python is more catholic than we realized?  Even in The Life of Brian? Plus lots of Fr. Benedict Groeschel quotes, so that pretty well settles it.

Four-and-some reasons this one is a keeper:

What I like most: Julie grapples with popular culture head-on.  Lots of quotes from popular books, TV shows, movies.  And she doesn’t always agree! Sometimes, there’s a quote that sounds good, the kind of thing that someone says at a dinner party and everyone’s nodding and agreeing with it, and you want to say something very uncharitable because really even though it sounds so wise, it’s just drivel.   Julie takes quotes like that and answers them directly:  What’s the underlying truth?  What’s the lie?  What’s a catholic to do with that sentiment?

–>  For this reason, I think this is a great book to keep lying around in reach of teenagers.  It’s a textbook on critical thinking in disguise.  Oh and a sermon or 200.  And a lot of Wizard of Oz.  With an index.

I give it an I’ll-think-you’ll-be-pretty-happy-with-it Recommend.

2 thoughts on “Books for people willing to be happy”