The highlight of the week for L. and I was doing laundry.  We visited and helped out at one of those places where homeless people can come and take a shower and get their clothes washed.

“We aren’t the only game in town,” the director told me.  There were charts taped to the wall with a catalog of services offered in the area — other shower places, where to find clothes, meals, shelters, everything.

It was good we were not the only ones at this, because the place was small: Two showers, three washers, three dryers.  One small combination waiting-and-laundry area, then the private bathrooms in the back, a storage closet, and that’s about it.  In the space of a morning, perhaps a dozen people came through.

A lady told me the story about when she was five years old and she wanted to run away, because she was mad at her father for not letting her join the Brownies.  She asked her mother to come along, since she’d need someone to cook.  Her mother agreed. They slipped off early on a Saturday morning, but then out in the yard her mother remembered she had a phone call to make before they left.

“Who do you have to call who’s so important it can’t wait?”

“That’s right.  I have to tell him not to stop at our house anymore, since you won’t be there.”

Having considered the repercussions, the little girl decided maybe they should stay for now.

If we had more space and more showers and more rooms, it would turn into an assembly line.  There’d be separated stations for each step of the process.  The waiting area would be larger, and washing and drying would be in another room.  Maybe folding in yet another room.  You’d barely get to know anyone.

It’s easy to be friends with a hundred or even five hundred people, but it’s impossible to make friends except one at a time.  You would miss that story. 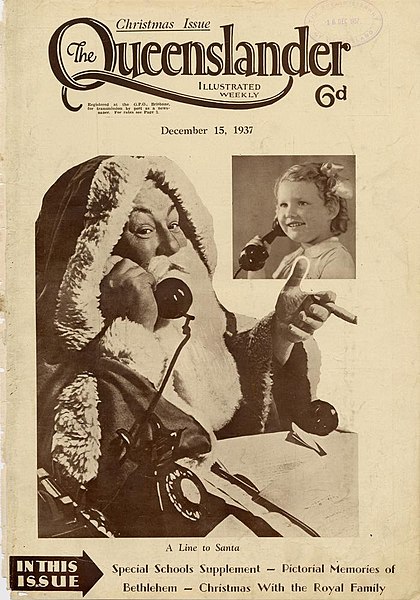 By State Library of Queensland, Australia [No restrictions], via Wikimedia Commons