Shortly before she died, my mom gave me the cross you see on the left here: 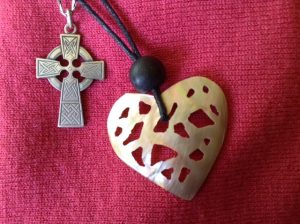 It is her baptism cross.

Her mother, my grandmother, was raised Catholic up in New Jersey.  Her father, my grandfather, was raised Baptist and staunchly anti-Catholic down in the deep South.  They met during WWII when his ship was in port near where Grandma lived up in the metro area of NYC.   They fell in love, married, and went on to raise their family in the US Navy.   They couldn’t come to an agreement on religion, so they came to a truce: As a family they’d attend whatever church was closest to base that was neither Catholic nor Baptist.

My mom was not, therefore, baptized Catholic as an infant.

As a girl, sometime in the late 1950’s most likely, she attended a Billy Graham crusade.  She told me she found it very moving — she was in fact evangelized by that crusade.  She was baptized Presbyterian (due to the truce), and that cross is the one she received at her baptism.

Later in college she converted to Catholicism and married a cradle Catholic.  As happens to many families who get overwhelmed by young children and moving around with work, for about a decade when I was growing up our family lived firmly on the list of Bad Catholics Parish Staff Love to Hate.  We were the people taking your parking space and crowding your pews twice a year.

Mom didn’t like that though.  She knew we needed to be going to church every Sunday.  She kept trying and trying, and eventually she was victorious.  For many years before she died she was fervent in practicing and sharing the Catholic faith.

My dad, the same guy who was such a foot-dragging-Catholic during our Tick Off The DRE years, went on to meet my stepmother (that’s her heart up there to the right) at church after he was widowed. The two of them are now active in their parish, carrying out all kinds of works of mercy and going on parish pilgrimages to holy sites around the world.

Would we have the same story if my mom hadn’t attended a Billy Graham crusade?  There’s no way to know.  But she did, and it made it a difference in her life.