At the NYT: Motherhood in the Age of Fear.  It’s about the way mothers (but not fathers) are condemned for taking “risks” that are, statistically, safer than other perfectly acceptable parenting behaviors.

In discussion of this article, a reader shared how the other mothers at the playground didn’t appreciate that the reader’s kid could safely climb up high without needing a parent hovering at every moment.

The boy was climbing before he could walk.  That’s the nature of the boy.  He broke his collarbone twice in twelve years doing ordinary kid things with feet on the ground (tripped over a rug; bonked by another kid playing tag), but has climbed his way through 18 years without incident.  By “without incident” we include the time he slipped into a rocky crevasse and fell perhaps twelve feet onto the ground beside a raging stream below, but was just fine, because he was in the habit of practicing falling at his friends’ house.  By “without incident” I mean: “Without injury.”

The boy was going to climb things.

We live near a playground.  We would go to the playground, and when he was a toddler (not yet two years old), I would stand behind him as he climbed and spot him.  What it means when you “spot” a climber is not that you are there to catch them.  It means that you are there to prevent serious injury.  I would verbally warn the boy to hold on tight, and I would warn him if he wasn’t being careful.  And then if he fell despite my warnings, I would let him take the fall.

So he felt a few falls.  He wasn’t injured, because I was there to make sure he fell in a way that didn’t cause injury.

By the time he was two, he could climb anything at all, and he had a grip that wouldn’t quit.

That’s how you teach kids to climb.  We taught our daughters the same way, and I will say the one drawback is that our youngest complains bitterly about ordinary hikes on smooth ground.  She only really likes trails that require constant scrambling through technically-challenging rocky terrain.

That’s how you teach kids to do anything.  You have to find a balance between giving them risks, but managing the risks.  One of my grandmothers-in-law told of teaching her boys to cross the street in downtown Baltimore. First she’d teach them by example.  Then she’d make them practice with her present.  And then she would send them out alone, and discretely watch from a distance to be sure they were doing as she’d taught them.   When she was satisfied they had learned how to safely cross every time, she quit watching and let them roam free.

My own grandmother told the story of coming to visit us, and passing my little sister as she was walking home.  Grandma stopped and said, “Would you like a ride home?”  My sister kept walking furiously, refusing to make eye contact.

Why?  My mom had taught her not to accept rides unless the two of them had planned it ahead — no getting in the car even with someone you know. She’d told my sister that one day she would test her by having a friend see if she could get my sister into a car.  My sister assumed this was the test.

Professors I know are talking about how kids are coming to college less and less able to cope every year.

The attack on “negligent” mothers feeds into this.

What are you teaching your kids?  Are you teaching them to be perpetual babies, always needing someone to follow them around and rescue them from the least little risk?

Or are you teaching them how to climb? 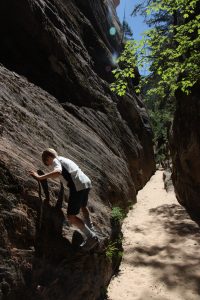