This morning I woke to the sound of the septic guy’s truck rumbling outside my bedroom window.  I started to panic — they weren’t supposed to be here until next week, and I still needed to move some plants out of their way.  Then I realized it was just the tank-emptying guys, not the installing-new-drain-fields guys, and I relaxed.  But I quick put on yard clothes and went out to investigate anyways.

And learned that the drain field guys would be arriving in twenty minutes.

The drain field guys helped me get the last of the plants out of the ground.  Thankfully it’s been wet all week.  Now I’ve got homeless plants sitting in bins in my back yard, waiting for me to decide where to put them.

The most interesting thing was watching the septic guys dispose of trash.  The trench for the drain field is about six feet deep.  They lay the drain pipes, and big columns of mesh-wrapped packing peanuts that are the new gravel of the septic world.  And then anything that needs to be thrown away — shrink wrap, tin cans, old pipe dug up in the process of cutting the new field — they just toss it in the trench.

My sense of order was disturbed, but I reminded myself that if not here, then these items would just be hauled off to be buried in some other patch of earth.  Jon pointed out that you would not want to touch the old drain lines — better to just let the backhoe nudge them back underground.

It is really cool watching a skilled backhoe operator work in a tight space. 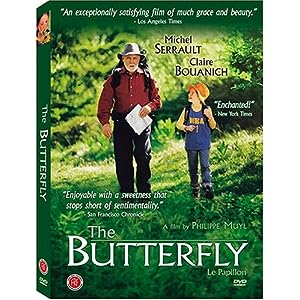 Le Papillon is a mighty good movie. It’s French, very French, but no humans die and it has a happy ending.  (It does have the obligatory smoking scene.) Beautifully rendered, the language is artful and the English subtitles do it justice.  My five-year-old has watched it more than once, and she doesn’t seem to mind not knowing the words.   The seven-year-old minds – but she needs to practice her reading anyhow.

Helpful film for the French student because the dialog is spare but covers lots of good language-learning territory.   Advanced students will appreciate the word play and the chance to learn a few interesting idioms.  Head’s up, the film ranges over a number of touchy subjects (abortion, mental illness, honesty, fit parenting, the Final Judgement, etc.), so parental presence is called for.  You wouldn’t want to miss this anyways.  Excellent film.  I could watch it three times in a week.