So let’s talk about the feet of Jesus.

God becomes Man, and the prophet sent to prepare the way for Him declares, “I am not fit to untie his sandals.”  We can imagine our Lord untied his own sandals most of the time.   She may or may not have been the one to remove his shoes, but we know the sinful woman did wash those feet.  That woman might or might not have been Mary Magdelene, but Mary certainly did know those feet as well.  The feet she saw pounded through with nails weren’t generic metal feet hanging in your hallway, they were the feet she had held and caressed and perfumed.

I have a friend who is a nursing student, and she tells me that when she has downtime working in the critical care unit, she’ll fill the hours by going around and washing the patients’ feet and massaging them with lotion.  Very sick patients typically have feet in horrible condition and a desperate hunger for human touch, both.

When Mary Magdalene met the resurrected Jesus in the garden, she wasn’t like Thomas who asked to see the pierced hands and side; had she asked, it probably would have been to see the feet.

In my absence from the internet, another Catholic food fight has broken out over the question of what people should do with themselves during Mass.  The latest round concerns the direction priests point their feet.  Where your feet go, you go.

Because humans are body and soul both, what we do with our bodies at Mass matters.  The Mass can’t happen if the priest stands in a corner and prayerfully wills it to be so.  Human wills express themselves in bodily action.  In carrying out the actions of the Mass a priest makes the Mass happen — it can happen no other way.

The other sacraments are the same.  Thus the question of feet is important.

We Catholics get fervent in our opinions about what everyone should do at Mass because we know deep in our souls that our bodies matter so very much.  Thus we’re fifty-some years in to a massive Catholic food fight over how we laypersons might best carry out “active participation” in the sacred liturgy as mentioned in Sacrosanctum Concilium.  Says the Church:

In the restoration and promotion of the sacred liturgy, this full and active participation by all the people is the aim to be considered before all else; for it is the primary and indispensable source from which the faithful are to derive the true Christian spirit; and therefore pastors of souls must zealously strive to achieve it, by means of the necessary instruction, in all their pastoral work.

It’s a food fight that typically devolves into two questions: Who else can we put a cassock on, and how do we persuade Catholics to sing more?

So I want to tell my story about active participation in the Mass, and singing, and the feet of Jesus.

I like words.  I am the person who pays attention to the words of all the hymns we sing at Mass.  I like to sing at Mass, because I like having all those words about God and to God moving through my body and coming out of me.  I was pretty happy at St. Populus, my home parish, where every Mass was a folk Mass in the best meaning of that term: We served up a four-hymn sandwich sing-along every Sunday, always and every time meant to be that part of the Mass when everyone joined in with gusto.

The actual amount of gusto varied.  But that was the goal.  It was a goal that I loved.

Then my husband reverted to the Catholic faith (good) and I discovered that he could sing (interesting) and he became a cantor at St. Populus (variable).  There wasn’t another bass available to help him with his cantoring skills, so he drove down to Our Lady of Classical Choirs and pestered the choirmaster until they got tired of his badgering and agreed to teach him to sing.  One thing led to another, and I ended up with 50% of my family in the choir loft at not-my-parish.

The trouble with OLCC, in addition to being not-my-parish, was that half the time you couldn’t even understand the words they were singing — even if it was English.  The sound bounced off ancient plaster mercilessly.  Furthermore, whether you could understand it or not, the bulk of the Mass on any given Sunday was done in the style of Not a Sing-Along.   I was aware that the whole thing was purported to be exceedingly beautiful, but couldn’t we all just have four nice easy hymns to sing together as a group?  Please??

Then some things happened.  One thing was that I was now living with three people who played this strange, purportedly beautiful, music around my house all the time.  I got to know the music better.  It was no longer weird sounds bouncing around a tall building, it was something my ear understood and could make sense of.

Another thing that happened is that over at St. Populous we had a little Latin club going on Friday mornings for about a year, long enough for we ignorant laypeople develop to a working familiarity with the meanings of the words that tended to bounce around during the Gloria and Sanctus and all those other things that were Not a Sing-Along down at OLCC.

I am persuaded that I am the Bread of Life is all the proof anyone needs that ordinary people aren’t quite as stupid as our betters pretend.  If you can teach we slobs in the pews to memorize the key points of John chapter 6 in an irregular, non-rhyming, voice-cracking, genre-less song, than we slobs can probably learn all the other, much easier, supposedly-too-hard-for-us stuff as well.

The final thing that happened to me was decrepitude.  OLCC became an appealing parish to me for two reasons:

I remember this night at Mass when active participation ceased to be about marching around or singing along.  I was at OLCC, sitting in the pew because standing was not on my to-do list (decrepitude), it was some feast or another, and the Gloria was going on forever, and ever, and ever.  The choir would sing some line of the Latin, and then sing it again and again in fifty different variations of hauntingly beautiful soaring tunes.  Then on to the next line.

Not a Sing Along.

It was a Pray Along.

I finally got, for the first time in my life, a chance to pray the Gloria with something that felt like justice.  No more wincing at the splendor of tu solus sanctus then quick keep moving, time for the next big idea.  Each idea, one at a time, washing over the congregation, swirling around in a whirpool of words, seeping into our thoughts and wetting the soul’s appetite for the next line of the prayer.

It isn’t that they don’t ever do hymns or plebeian Mass settings down at OLCC.  Nor do I have any less love for a good rousing Sing Along Mass.  Singing is good for you.  It’s good for all the parts of you, and it would be a strange and disastrous thing if we pewsitters all gave it up and used no other part of our bodies than our ears at Mass.

Curiously, the part where feet come into it was during a Mostly Sing-Along Mass down at OLCC.

Because I am decrepit, I can’t always sing, or can’t sing the entirety of a Sunday’s pewsitter parts.  Because I am a word-person, lately sometimes I do the very weird thing of standing there with the hymnal open, mouth shut, eating up the words with my mind while the congregation sings them aloud.

This past Sunday, though, I was unusually decrepit even for me.  I found a seat against the wall, and didn’t even bother trying to lip sync the Our Father.  I was pretty happy to just be standing-along during the bulk of the standing parts.  I was secretly pleased that the side aisles were relatively empty and all I had to do was wave to a couple people several rows behind me during the Sign of Peace, and then I was freed to go back to my still, silent bubble.

I didn’t know, on Sunday, that Internet Catholics were busy arguing over which way priests point their feet.  The readings were not exactly about feet, except that they were.  The Law living within us, He is the image of the Invisible God, the parable of Mercy-Made-Flesh.

We don’t have to guess what active participation might mean, because Sacrosanctum Concilium tells us straight out:

11. But in order that the liturgy may be able to produce its full effects, it is necessary that the faithful come to it with proper dispositions, that their minds should be attuned to their voices, and that they should cooperate with divine grace lest they receive it in vain [28] . Pastors of souls must therefore realize that, when the liturgy is celebrated, something more is required than the mere observation of the laws governing valid and licit celebration; it is their duty also to ensure that the faithful take part fully aware of what they are doing, actively engaged in the rite, and enriched by its effects.

It means that when our Lord comes to us, we recognize Him and respond accordingly. 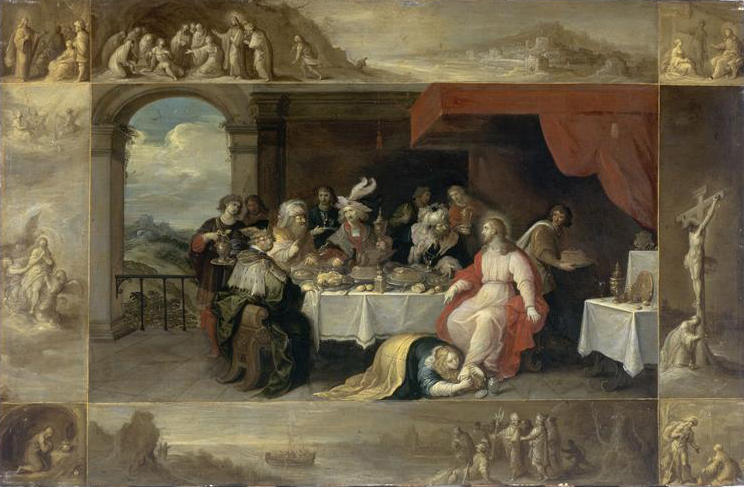