Texas is on my mind, what with friends being flooded and vivid memories of SC’s teeny-tiny-in-comparison floods.  Something to know about these disasters: You don’t hear from the worst-affected.  In order to post photos mid-storm, you have to have power and internet.  In order for you to see photos from disaster crews, the disaster crews have to be able to get into the area.  You can reasonably assume the destruction and death in Texas are much worse than what we are seeing now.

Into this, yesterday afternoon I was enjoying a little slice of Heaven: A leisurely afternoon of lunch and conversation with good friends in glorious weather.  During which time a friend posed a disaster-preparedness question: In the event of an EMP attack from North Korea, do we need to worry about having an emergency water supply?

On the one hand, the answer among the conversationalists was yes: Well pumps and city water facilities both use electricity, so if that goes out, your water goes out.

But I felt compelled to add: I have no idea whether the North Koreans will ever disrupt my water supply, but I know for a fact the city’s beaten them to it plenty of times.  So yes, I store water.  Weirdly, thus far we’ve been spared weather-related disruptions even when those nearby were not — but construction crews working near water mains?  Oh yes, that gets us every time.

Tip:  When you empty a liquor bottle, you have a freshly sterilized container on your hands.  Go ahead and fill that puppy up with nice clean city water while you’ve got it, screw the lid on, and stuff it into some corner where you can never reach anyway.

Related Tip: If you are using a vodka bottle, label your stored water.  Otherwise, you’ll lose track of whether you’re looking at water or vodka.  When you need the one for something, the other just won’t do.

Since water’s something you just can’t go without, it’s something I’m a recreational-prepper for.  When a hurricane comes, I turn over the canoe, lay out the kiddie pools, and put out coolers and other containers under the eaves of the house, to collect rainwater in case we lose water afterwards.  You want to be able to flush your toilet post-hurricane, even if it doesn’t rain again for a few days.

As footage from Texas shows, though, all your prepping can come to naught.  Catching clean rain water for post-storm use does you no good whatsoever if your clean water is under four feet of biohazard-laden flood waters.  Storing rice and beans won’t help if your rice and beans are soaked in the flood, or carried off in the tornado, or burnt to ashes when lightning catches your house on fire.

So why bother prepping? 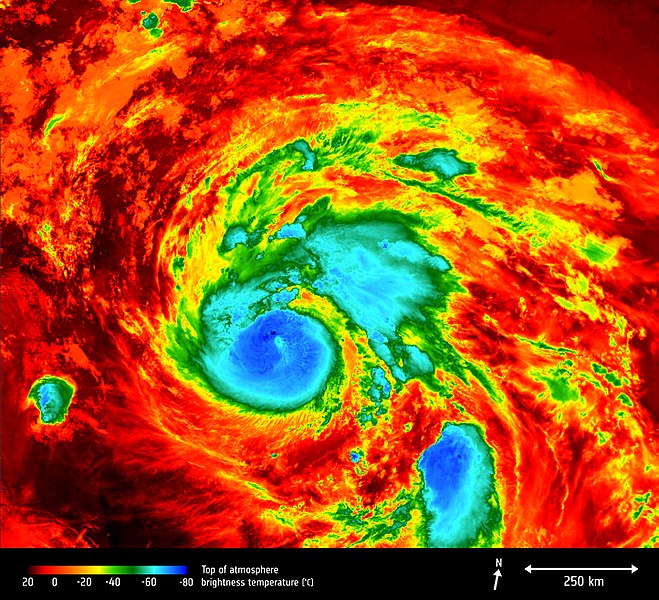 The reason everyone should do at least a little bit of disaster-preparedness is because you have no idea ahead of time who’s going to get hit, when, where, and how.  If my neighbor’s house floods — whether due to a hurricane or just a busted washing machine hose — if I have a little stash of instant coffee over at my clean, dry, spared-disaster house, things can be better.

Tip: Instant coffee + a box of UHT chocolate milk = A tiny package of sanity when civilization has receded beyond your horizon.

Double Tip: Even more than coffee, keep a reserve supply of any necessary-to-life medications you take.   If you possibly can, make arrangements with your physician to get yourself one month ahead on your refills.

Triple Tip:  Many people can’t do this because we have stupid, stupid, stupid laws.  Consider lobbying for change in this regard.

The reality is that in a major disaster, everything is going to be horrible.  You can’t possibly build the perfect bunker to shield yourself from every misery.  But what everyone can do is think ahead and set aside a little bit of provision, according to their means and their needs, so that overall the odds are better that somebody nearby will be in a position to provide emergency relief until bigger help can come along.

Related, three posts from SC’s floods that might be of interest.  The first two are particularly apropos if you have young people who would like to drive down post-disaster and help with the massive clean-up:

Once it’s all-clear and you can safely get in to help in a useful, systematic way, in conjunction with some effort spearheaded by locals who know what it is needed — which is going to be a while, and by that time the work is going to be super-nasty — do it.

The third is probably only of interest to a select audience:  What’s the Story Behind the Flooding in SC?  Obviously, the story behind the flooding in Texas is that Harvey is dropping several giant lakes worth of water on land that would rather be land, thanks.  What’s relevant for SC folks, and others who’ve endured similar spot-disasters, is that what we’ve experienced are situations where most people are fine, if inconvenienced, which leaves a very strong community at hand available to assist with clean-up.

Greater metro Houston, in contrast, is getting poured on in a way that’s going to be devastating more people than not.  And remember that washed-out roads means that the ability of anyone to get in and help will be hampered for a long time.

So this is a hugely different situation than that time your town was hit by this or that terrible-but-limited natural disaster.  And you know from memory that things were plenty bad enough then.  This is super-bad.