The latest on Donald Trump’s lewd exploits have unleashed a flurry of “all guys talk that way” defenses from desperate supporters.  When it was Bill Clinton extorting sexual favors from interns, we heard roughly the same thing.

While every one of us sins, there are differences in behavior among persons.  That’s why some people can be trusted to watch your children, or your money, or your new car, and other people cannot be.

As voters, it is our job to be discerning.  The right sinner for the job is the order of the day, as I discussed on a different but related question of fallen men and women in positions of authority.

Here is a related fact: Not everyone on the internet is a pompous boor.  I have a fairly active presence on Facebook, and my friends list runs the gamut politically, religiously, and socially.  I have friends who, in this election, are posting strong political opinions that also happen to be terribly, terribly wrong.  (They feel the same way about me.)

None of these people are narcissists.  None of them are bent on stirring up drama.  All those horrible things you hear about, and perhaps experience, in social media relationships?  Not happening among my friends.

Another related fact: This doesn’t happen among my real-life friends either.

It isn’t because I live in some special protected bubble.  It isn’t because fairies and unicorns circle around me every day, keeping out the criminals and crazy people.  Real world nasty situations find me just the same as they find anyone else.

And yet I and other men and women I know manage, all the same, to avoid surrounding ourselves with toxic, dangerous people as a matter of course.

That means you can’t be so concerned about your career that you’ll tolerate the lewdness of a Bill Clinton or a Donald Trump because you desperately hunger for the glamour or the promotion that comes with it.  When someone behaves badly towards you, that’s on them.  Your virtue will not deter someone determined to violate you.  But when you realize someone is a dangerous person, you can make choices about how to respond.

You can choose not to be friends on social media with that toxic drama queen.  When some guy thinks he’s got a right to grab your genitals?  You can show him what knees are for, thanks.

Yes, I said that.

I didn’t just say it, I’ve done it.  I don’t tell a lot of personal stories, but here’s one: I was staying with another family as a teenager, and the teenage son, same age as me, got the idea that he should to come to my bedroom and inform me he’d arrived for intercourse.  The tone was a little difficult to read — was he joking? He claimed afterwards he was.   But the words were not difficult to understand at all, rather unequivocal, so I kneed him in the groin.

(The fact that he was close enough to be on the receiving end of that response tells you a little more.  I didn’t have to disturb myself and cross the room to carry out the counter-offensive.)

He proceeded to get upset at me for doing that, and to inform me that I needed to be more careful, as such behavior on my part could cause serious injury.

Well, darling, that behavior on your part is what got you injured.

Another word was never said.  I’m sure I immediately garnered the reputation among our mutual friends as the resident prude.  I also never had another untoward advance during the time I was staying with that family.  Guess what?  My reputation was deserved and earned.  Call it prudery or call it clear communication, do not present yourself in my bedroom even jokingly soliciting sexual favors.

Nothing I did brought on that advance.

Whatever caused that young man to think he could get away with that behavior, it wasn’t me.  Not every intern who’s been groped by a Clinton or Trump was “asking for it.”  People who want to get away with deviant behavior aren’t sitting around wringing their hands waiting for an invitation.  You cannot control the fact that there are people like Trump out there in this world.

You can control whether you tolerate their behavior.

Your options may vary, but you can choose to use the ones you have.

There’s not always a quick, easy way to stop an aggressor.

You have to assess the situation and do the best you can.

But among your limited options, choose to resist in whatever way you can.

People who make themselves lists of the reasons they need to tolerate bad behavior are people who invite continued bad behavior.  Don’t act so shocked you’re surrounded by evil when you keep choosing to surround yourself with evil.

You do not have to cooperate with the people who want you to put a crude, immoral, inept candidate into office.

As a last resort, if your state offers neither of those options, protest by going to the polls and participating in all the elections that have moral options, and abstaining only from those races where there is no moral choice.  Follow-up by publicly voicing your opposition to the slate of candidates and pointing to the better options.

There Exist Decent People in the World

There are men who treat women decently.  There are women who stand up for the lives and rights of all women, even the very young ones. There are politicians who follow the law in all matters, and do their best to act in the interest of the public good.  There are principled men and women who would go into politics, or go farther into politics, if they knew they were wanted.

Stop shutting up and putting up.  This year and every year, refuse to be screwed. 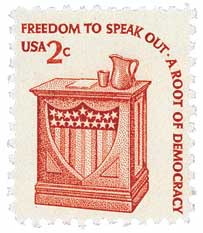