St. Joan of Arc’s feast day (Jeanne d’Arc if you’re looking for French-language info) is May 30th.  When I told people I was going to France, I got asked a lot if we’d be going to Lourdes. The answer is no.  I have no objections, it’s just that I was going to be on the wrong side of the country, and as much as I love a good road trip, there are limits.  But we were on the proper side of the country for a side trip to Domremy, where Jeanne d’Arc was born and where she lived most of her life.

Up above the town, they’ve built a modern (“modern”), massive church for receiving pilgrims. 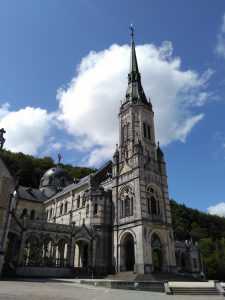 When we visited, there was a youth group tour going on: 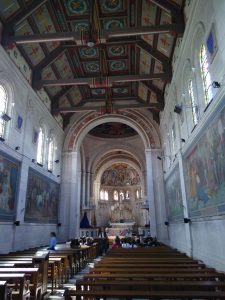 The artwork is vivid, and of the sort to make you wish you had a better camera. 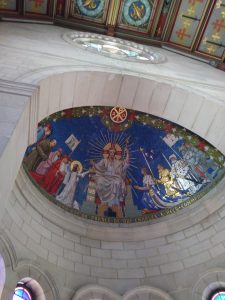 The place was just chock full of interesting stuff, heavy on the fleur-de-lis. 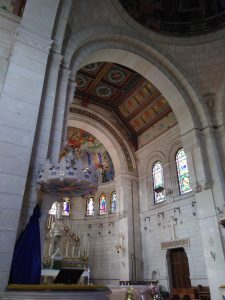 From the hillside shrine you can look over the rolling hills of Lorraine. 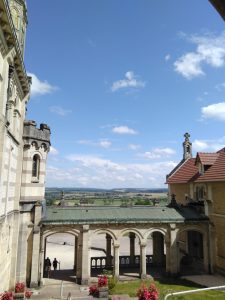 I don’t think very many people go to Lorraine — and yes, it’s where the quiche comes from (which can be had in Alsace, so you don’t have to go to Lorraine to get it). It’s very pretty countryside, but doesn’t have the wow factor of other regions.  I was glad we had a couple excuses to drive through during our trip.

So then you drive down to the little town of Domremy itself, where the house Jeanne d’Arc grew up in is still standing: 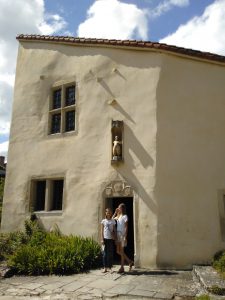 It’s been remodeled since her day, but it’s still rustic enough to give you the general idea: 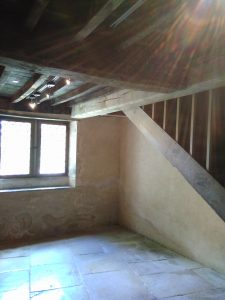 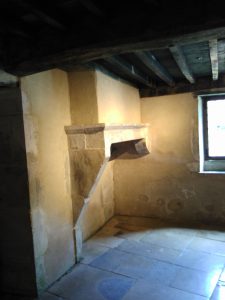 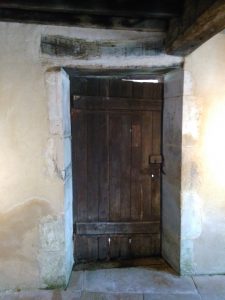 Outside is a marker at approximately the place where Jeanne heard the first locutions.  She described it as being in her father’s garden, by the right side of the church.  That would be here: 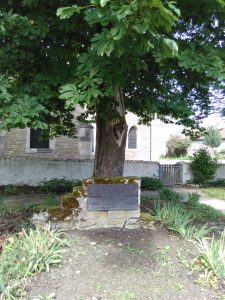 You can see the church beyond that tree. The church has been renovated since Joan’s day, as yours probably has been, too.  Here’s a snapshot of the new interior: 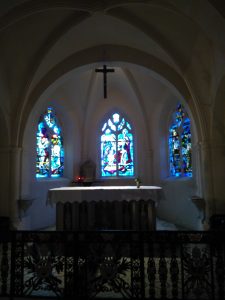 It’s still kinda old.  I mean that in a good way.  It’s a very tranquil place to pray.

They held onto a few things from the old chapel, though, including this holy water font from back when Jeanne was a kid: 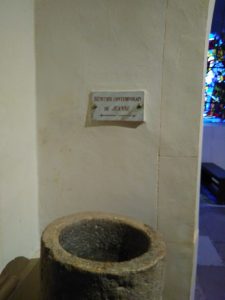 And here’s the baptismal font in which she was baptized: