Today the encounter between Jesus and the Canaanite woman came around in the readings again.  I once heard a deacon preach that this incident just shows that Jesus was “human” like the rest of us, where “human” is code for “sinful.”

Back in 2014, I wrote a bit of Gospel fan fiction, taking the words of Scripture verbatim, but filling out the details Scripture doesn’t supply.  Everyone does this when they read, and sometimes our fill-in-the-blanks interpretations are justified and sometimes they are not.  I wrote a follow-up post on why I hold with the Jesus is Not a Jerk Thesis.  I still hold with that reasoning:

Thus when the infamous quote comes around full circle in conversation with the Canaanite woman and his disciples, we have a Jesus who:

And then He pulls out a pun in his dialog, turning the meaning of the expression on its head.

Were I writing that same story today, I wouldn’t write it the way I wrote it back then.   Today my mind is on the idea of racism, and for the reasons I summarize above (see the original post for more details), I tend to view this encounter between Jesus and the Canaanite woman as the counterpart to what today we would call an anti-racist moment.  Jesus has been attempting, through word and action, to teach his disciples that salvation is for the whole world.

They will eventually get that message (“neither Jew nor Greek”), but they haven’t got it yet.

Here they are being asked to heal someone’s daughter of a demon.  A demon, guys!  This is serious, serious trouble, and it’s the kind of trouble that elite religious healing-commando people ought to be on the job taking care of.  Instead they say: Send her away. She’s bugging us.

What exactly do you do with people whose hearts are so hardened?

Give them another talk?   You can only give so many talks.

People are cured of their bigotry only when they get to see the world through the eyes of the person they’ve pushed off and objectified.  The disciples would have happily dismissed the woman as some noisy, intrusive, undeserving gentile.  Jesus says what needs to be said — he verbalizes what they are thinking — so they can see how unjust it is, and they can see in her response how deserving of their respect she is. 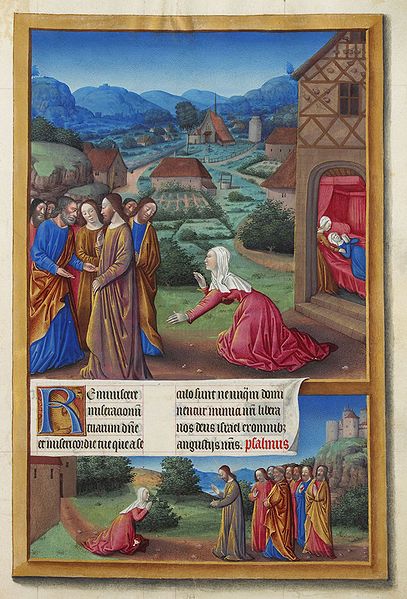