So if you post something like last month’s Name This Pain bleg, it’s a good idea to update sooner, rather than later, when you rejoin the happy world of healthy-type people.  Otherwise, every time you turn up some friend will peer at you with concern and ask gravely, “How are you?”

If you are me, it’ll take you a minute to wonder why they are asking this way, because I’m somewhat forgetful in this regard.

(My description of a particularly difficult bout of unmedicated childbirth:  “It took me several days to be willing to do that again.”  Whether this level of forgetfulness is good for the overall survival of the species depends on which sort of calculations you favor.)

So first of all, many thanks to those who replied to me.  The most interesting response was that many people wrote in to say it sounded like their own experience with Restless Legs Syndrome.  This was curious, since it means that a number of physicians have ditched the “urge to move” component of the diagnostic criteria for that disorder.

More interesting: Two readers with RLS and one reader who did not mention RLS said that their symptoms (identical to what I described) were caused by medications.  The three medications mentioned were: Antihistamines, ibuprofen, and migraine medication (Imitrex, I think?)

Whether any of these are a factor for me, I do not know.  I ran some experiments which were inconclusive.

Here is something I do know: God hears the cry of the migraine sufferer.

That’s not me.  That’s my poor friend and colleague from whom I really needed some information, and even when she explained that she was standing in the dark because she had a migraine, did I leave her in peace?  No I did not.    Even though I KNEW that I was being a horrible person and begging for divine retribution, I persisted in asking my questions anyway — which she answered quite helpfully, just as I’d hoped.

So then when I came down with a couple days of non-migraine-but-still-deeply-irritating headache shortly thereafter, the explanation was obvious.

I don’t know that I wouldn’t risk it again, honestly.

Anyhow, I am doing wonderfully this month.  Perfectly perfect, other than when I’m courting wrath.  You who have been praying, I am immensely grateful. 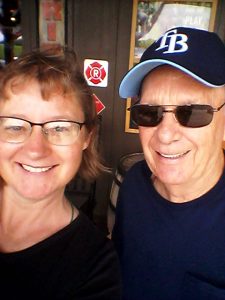 Here’s me looking as happy as I am, after lunch with Larry Peterson today.   I am really enjoying this thing where I just go around places having a good time, done.