Here’s something interesting about the social media reaction to the racist violence and demonstrations in Charlottesville: People felt the need to assert that racism is wrong.

It was a specific kind of assertion: Not just anger or frustration or sadness, though there was that.  Rather, there were many assertions that seemed to be purely about the need to affirm that yes, in fact this is evil.

Contrast this with, say, the announcement (I saw several over the past few days) that someone’s child had died of a terrible accident or illness.  Those announcements spur people to offer their prayers and condolences, and often in the wake of certain kinds of deaths there will be some venting of how much we hate suicide or drowning or cancer or whatever the source of the problem was.   There might, later at a less sensitive time, be links shared on how to cope with that problem or ways to prevent it in the future.

But no one feels the need to wave a flag saying, “Guys! Drowning is bad!”  or “Cancer isn’t glamorous!” or “It’s time we put aside our love of fatal traffic accidents!”  There are no links to inspiring stories about people who campaigned to persuade the world that being crushed in a landslide is in fact undesirable.  There will be no hopeful mention of the man who used to just love the prospect of dying from massive burns and smoke inhalation, but thanks to a profound change of heart, he now realizes that’s not what people should want out of life.

These evils are self-evident.  You might disagree over the extent to which they can or should be avoided (close all the mountain passes!), but you don’t disagree that these things are bad.

People can’t shut up about the evil of racism because it is still a pressing topic for them.

Perhaps your friend who daily asserts that skin color doesn’t matter can remember a time when he did think it mattered.  Maybe he wasn’t that bad, but he was bad enough.  He looked down on people of other races, or he felt that somehow his own people were superior, or that there was some justification for certain types of discrimination.  Maybe he theoretically believed in human equality, but in practice he felt that most people of this or that race were not, in practice, as educated and moral and generally deserving as people of his own race.  Maybe he still struggles to shake off the vestiges of prejudice.

Or perhaps your other friend grew up in an openly racist culture (if she’s old enough, she almost certainly did), and she still has memories of segregation and overt discrimination.  Maybe she remembers the callous things some people used to say, and the downright mean things other people used to do.

And perhaps that other group of friends who are always asserting racism is wrong are doing it not because it has ever been an issue for them, personally, but because they are regularly encountering people who are racist.  Maybe they see racism in action.  Maybe they overhear racist comments.  Maybe they get into arguments with others who try to make the case for racism.

This is why people post those memes.  The repetition grows tiresome for us who aren’t at that point.  We don’t need anti-racist reminders anymore than we need reminders that air should have oxygen and diesel fuel doesn’t belong on your drinks table.  We wish you would quit posting pictures of different-colored kittens all snuggled up together in a display of racial solidarity, and get back to sharing the plain old non-polemical kittens for which the internet was invented.

But we’ll be patient.  Because if you are a recovering racist, or you spend your day with not-yet-recovering racists, maybe you need an outlet.   If Solidarity Kittens help you, then please: Be helped.

***
In the making of this post, I looked through many kitten photos on Wikimedia, because I’m committed to social justice that way. Other things you might like to know about: 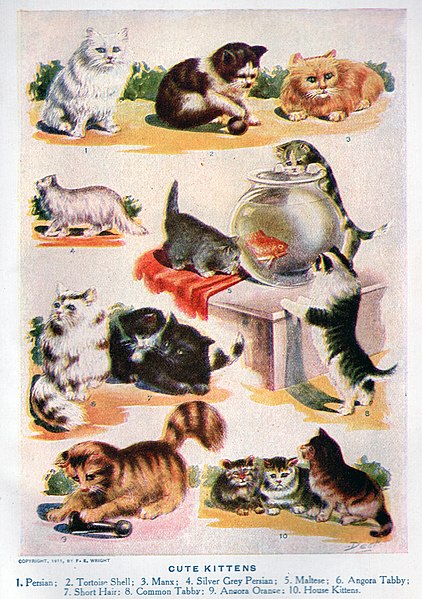