This is a story from the last day of the Epic Vacation, and about a subsequent miracle that happened the week after, and my cat.  It comes up now because a friend of mine could use an eyesight miracle, so if you’d kindly pause and say a St. Odile Pray for Us, I’d be most grateful. Thanks!  Now for the touring+miracle story.

The kids and I had planned to visit Mont Sainte Odile while we were staying out in the village on the first leg of our trip.  The monastery is not far from the concentration camp, so the obvious plan was to visit one site in the morning and one site in the afternoon.  That plan, like many of our epic plans, was thwarted by our persistent difficulty in getting out the door early each day.   We left Alsace for the first time having neglected her patron saint.

After a week in Chamonix and a few days around Paris, we returned to Alsace to stay in downtown Strasbourg.  I decided to hang onto the rental car since the marginal cost was relatively low and I wanted to keep our options open.  For the last full day of the trip, the kids voted that we take one more adventure in the countryside and go see that monastery after all.

Here’s the tomb of Ste. Odile, where I asked for her intercession on a variety of concerns, not least of which that I would like very much to return again to Alsace, thanks. 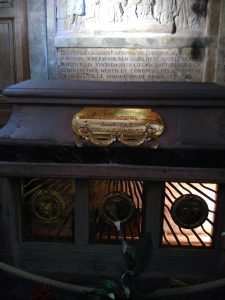 Here’s the ancient chapel in the monastery where my children stood before the crucifix bickering with each other.  There’s a door from here into the main chapel where we could hear holy people next door praying the Mass (we’d arrived mid-Mass and chosen not to interrupt). 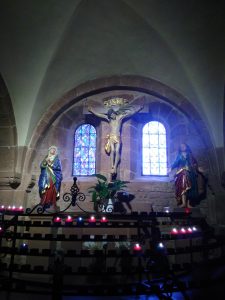 In the monastery gift shop you can purchase all the usual Catholic merchandise, including pun-laden cologne: 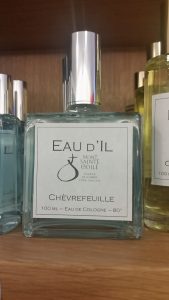 The word “eau” means “water” and is pronounced like the letter O.  Eau d’Il means “water of He,” with the obvious spiritual connotation, and is pronounced the same way as the name Odile.   (Grammatically it’s as awkward as the Son-sun puns.) This pun on the word for water, though, is wildly entertaining to those of us who can’t resist a pun, because Ste. Odile is famous for her miraculous spring:

At this place, Odile struck the rock, and the water that gushed forth cured the blind man.  Pilgrims, halt your steps and rest there, to pray to God that he will enlighten your souls as well at this miraculous spring.

You can purchase the miraculous (but un-blessed) water up top at the monastery where it’s offered for a suggested donation in little plastic bottles, or you can bring your own container and hike down to the spring and collect water yourself for free.

I made the hike and drunk down my water bottle so I could refill it with water from the spring, because who can resist?  The kids ended up not joining me on the hike as-planned, but the road out of the monastery passes right by the spring, and they filled up their now-empty water bottles as well.  We were totally armed for . . . whatever it is Catholics do with unblessed water from miraculous springs.

Once back in town we emptied the car, cleaned it out, filled it up, returned it to the rental place, and went home to pack-up for our departure the next day.

Now it is absolutely ridiculous to plan to bring bottles of water in your checked luggage home from Europe.  It’s a recipe for wet laundry.  But our Catholic instincts were way too strong here, and so I carefully put our bottles of spring water inside large ziplocks and packed them amid a suitcase of clothes that wouldn’t get ruined if there was a leak, and which would absorb any leaked water so that no one else’s luggage got wet.  Miracle #1: Our water made it home intact.

So we get home and unpack and I’ve got these old used plastic water bottles containing un-blessed water from the miraculous spring.  I have a decorative bottle my grandmother gave me that was sitting empty, so I filled that bottle and corked it and set it out on the mantel, Catholic memento achievement unlocked.  There was, however, more water than would fit in the decorative bottle.  What to do with it?

I put it in the pets’ water bowl out in the yard.

Now for the big miracle.

This kitten is one of the pets.  Martin the Cat came to us as a stray, and when he arrived he had runny, gunky eyes.  Efforts by the vet over the past several years to treat his eyes have been ineffective.  We eventually decided that since he wasn’t in any obvious pain, he was just going to be a cat with an untreatable eye problem and there was nothing more to be done.  He’s a great little neighborhood cat, underappreciated at my house but who does the rounds providing companionship to several of our lonely neighbors who would not be able to take on a cat of their own, but who appreciate his daily visits.

Here’s the miracle: About a week after I put out the St. Odile water for the pets, I noticed Martin the Cat’s eyes were completely cleared up.  They haven’t gotten runny since then.

Is it possible Martin’s eyes just happened to have spontaneously cleared up that particular week, and St. Odile had nothing to do with it?  Sure.  It’s not like I poured water over his eyes and watched  an instantaneous  transformation.  What I do know though is that he had this eye problem that didn’t respond to any conventional treatment, and after drinking water from a spring whose water had cured a blind man, and a spring under the patronage of a saint whose symbol is a book with two eyes on it, after drinking that water, the cat was cured.

That’s all I know.

If the week after getting one of his rounds of eye drops from the vet my cat had been cured, I’d assume it was the vet’s treatment that had done the job. So I give St. Odile the same benefit of the doubt I’d give the veterinarian.

Video: The monastery bells ringing to announce the start of mid-afternoon prayer.   All through Alsace and beyond, church bells like this would ring for five minutes or so, straight, to summon the faithful to Mass.  The Epic Vacation category contains all the posts related to our vacation.  Some of them are pure tourist-info, and others are more commentary and stuff.