This is not a nostalgic look at the good ol’ days of Catholic blogging.  I first started blogging in late 2006, and sometime after that I met Dorian Speed, who gamely agreed to pose yesterday of our combined Monday-Tuesday penitential photo.  She is as fun in real-life as she is online, and since what we have in common is Catholic blogging, yesterday over coffee she posed the question: Do I miss the old days?

I started the century by discovering an online discussion forum that was mostly Catholic-moms, and twenty years later that group of friends is still together and still periodically meeting up in real life.  The old discussion forums were a great place for people who like debating, and I am one of that breed.

With that in mind, here’s some irony: As Facebook and Twitter have become the preferred stomping grounds for Catholic pundits of a certain age and sensibility, I find myself less interested in debating, and appreciate that those platforms are better suited to other types of conversations . . . and simultaneously I see other people make themselves miserable by immersing themselves in conflict there where they could so easily avoid it.

I say ironic because what I love about Facebook, Twitter, and other popular platforms I don’t use but which are similar in this regard, is that you can choose your conversation partners.  The old discussion forums and blog comboxes didn’t afford that luxury.  Now I can customize my discussion experience to avoid the people who make me crazy and spend comparatively more time with the people who make my life better.  I wish I had more control (I would like to see more photos of my nieces and nephews, less sloganeering), but I definitely don’t miss the days of the all-or-nothing online social experience.

It puzzles me that other people don’t just hit the “mute” or “hide” button when they tire of some acquaintance’s constant ranting. Then again, my favorite part of blogging is that no one has to read what I write.  It’s there if you want it, but I’m not imposing on anybody.

One of the marks of a longtime internet presence is that you end up with all these weird artifacts of your changing use of the machines.  I like to read online.  There was a time when Google offered G+, a fantastic way of gathering and sharing online reading.  When that shut down I migrated to Feedly, but Feedly doesn’t offer a free tool for sharing your favorite things.  So I started @JenFitz_Reads on Twitter, not for the purposing of twittering, but just as a convenient way of keeping track of articles that I found useful in some way.  The feed sits in the sidebar of this blog, and it’s meant to be a source of interesting links for people who are bored.

BUT, guess what, it’s a pain to switch between Twitter accounts.  So over the past couple weeks as I have been entering into conversations on Twitter (which I do not normally do, but call it spring fever or additional penance or whatever you like), it’s been easier to use my “alternate” account rather than my “official” account (on which I do almost nothing other than automatically forward posts from a couple blogs).  So, um, that’s twisted and backwards.  We’re just going to live with that for a while.

One thing I miss, as I told Dorian yesterday, are the days when Catholics of good will might be comparatively more liberal or conservative, but they were not quite so bitter. Angry? Oh yeah.  Outrage is the fuel that makes the internet go ’round.  We are not gentle people.  If we were peaceful souls, we’d clean our kitchens and paint landscapes and get dinner on the table on time for a change.  By definition St. Blog’s has always been the fortress and refuge of opinionated hotheads.  Over the past several years, though, unfortunately that superpower has taken on an unfortunate flavor for some otherwise decent folk who, I believe, do mean well.

I get the frustration.

It is hard to be a person who works for change — not just by writing, but by putting in hours of work on the ground in real life, day after day, year after year — and watches decades pass with large parts of the Church still locked up in the same old cluelessnees and corruption.  Good things are afoot in the Catholic Church, but if you don’t have a front seat on that work, or if you have too many dysfunctional (or in some cases even abusive) realities shoved in your face too often, it can eventually harden into jaded cynicism at best.  “Be the change you want to see” becomes the taunt of sacred overlords to their subjects.  It is a constant battle not to become bitter in such an environment, and far too many on St. Blog’s have surrendered to the temptation.  I get it.  I completely get it.

There is another topic that Dorian and other friends reminded me of in the last couple days: There was a time when people blogged for sheer love of it.  My favorite bloggers still do.

I’ve been writing since I was eight years old.  Used to drive my grandmother batty with my constant scribbling in the notebooks I carried around.  On those occasions when I find myself without a computer, I resort to a spiral notebook.  If there is no spiral notebook, I write on scrap paper.  I am honestly unclear on how people survived before the ready availability of writing materials.  Did you just go insane?  Or probably got the chores done, I guess. Until you went insane.

***
I like the state of the internet in 2020. Some people make themselves miserable by failing to use the mute button.  Some people make themselves miserable by obsessing over their “success” on the internet.  But none of that is necessary.  I’m very grateful for the many friends I’ve made online over the past twenty years. I’m very grateful for the many “real life” friends and family I can keep up with online who otherwise live too far away to stay in touch.  Life is good. 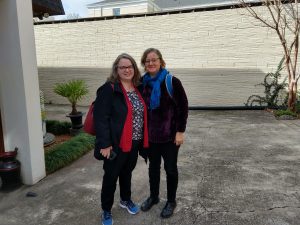 Our Photo Penance for Today: Dorian Speed and I standing together after coffee yesterday, early in the day before I devoted the next ten hours to wrestling with the beast.  It’s back in my editor’s hands this morning, .