So I have this artist who lives at my house and makes Bible verse paintings. 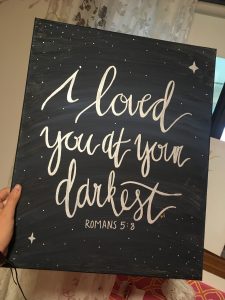 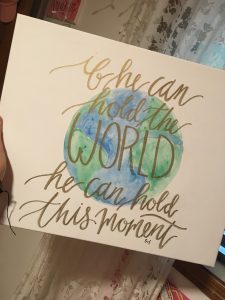 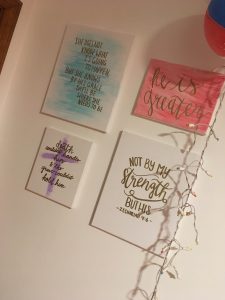 The one she hung in the bathroom is . . . topical: 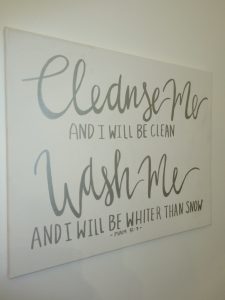 So that’s all good.  We’re keeping Hobby Lobby in business with our canvas-buying habits, even more so since I just gave her a new commission: I need John 20:22-23 on the wall, stat.

What happened is my 13-year-old came home yesterday and told me about an apologetics argument she’d gotten into with a grown-up who wasn’t too keen on the Sacrament of Reconciliation.  She gave it her best, but she’s not a hardened veteran like her older brother is, and plus she was one-on-one.  We talked about some different ways to charitably approach the topic, and then I went to the living room and moved the dog bed and the cedar chest and pushed back the couch until I could fish out our New Catholic Answer Bible, which we don’t ordinarily store under the couch, but I had seen it there when I was laying on the living room rug and I’d forgotten to rescue it then, so it was ready and waiting.  I left the sock and the plastic Easter egg for another time.

I couldn’t give her the actual citation, I just knew the verse was at the end of one of the Gospels since the moment occurred post-resurrection, so I sent her to check all the ends of the Gospels, but then I needed to go do carpool so I quick looked up the verse on Bible Gateway via keyword so that I didn’t leave her hanging.  I also handed her over my Precise Parallel New Testament, and explained that it was important to look up the verse in several translations so you don’t get blindsided if the person you are arguing with has another translation that phrases things differently.

“When in doubt,” I told her, “most Protestants will accept the KJV, so always check that.”

She did check the KJV, and noticed the use of the word ye.  I explained that meant Jesus was speaking to the group of apostles, not just one person, because ye is plural.  “The KJV is great for apologetics, actually, because you can point out the thou whenever Jesus is only speaking to one apostle.”

“Like ‘upon this rock I will build my Church,'” she said.  Yep, that’s my kid.  And that verse will be commission #2.

So this morning in the car on the way to school I quizzed her on what Bible passage shows Jesus giving the apostles the power to forgive sins, and she nailed it.  Probably I’m the only one who needs the art on the walls.  Also, she observed it must have been pretty weird for Peter getting a new name like Rock.  “Think about going around and everyone’s calling you ‘Rock’,” she said.

So I’m proud of that kid, but here’s the thing: Just because you are growing up in a house with Bible verses on the walls doesn’t mean everything is swell in your little Catholic bubble.  And that’s why, when my eldest daughter came home the other night and was talking about her frustration with the Church, I decided I needed to write about it.

The things she had to say are things I hear from a lot of adults, too.  What she has to say are things that some people like to dismiss, but I showed my daughter the number shares we’ve already gotten, and that tells me and her that she’s not alone.   There are a lot of people out there like my daughter, people who want to be Catholic, but it’s not going so well. You can read about it at the Register: “What Good Catholic Teens Want from the Church”