At The Washington Post: The decline of play in preschoolers — and the rise in sensory issues.  Reading this article was a moment of revelation for me.  Way back when #2 was about seven or so, I can remember walking down to the corner elementary school to play on the playground after hours, and we looked into one of the classrooms.  It looked ideal.  It practically called her name.  There was a wooden play kitchen, and child-sized tables, and loads of art supplies, and of course the wonderful playground just outside the big windows that filled the classroom with natural light.  For my little extrovert, this classroom was her people.

Then I came to my senses: This was was the kindergarten classroom.  By the time you are seven, it’s rows of desks and standardized tests for you.  Not to mention we’d had dealings with one of the neighbor-kindergartners, and so we were acquainted with the long list of “reading words” that five-year-olds at the corner school were somehow expected to memorize and supposedly “read,” at an age when, developmentally, not all children are even capable of learning to read.  All four of my kids went on to become fluent, competent readers who read for both pleasure and information, but none of them would have been able to read that list of words at age five.  They were physically unable.  Since they were at home, instead of being embarrassed by their supposed stupidity, they received the kinds of pre-reading instruction that educational research shows actually helps.

Some of things that help are language-based — read-alouds and rhyming games and stuff like that.  Something else that helps kids learn to read is learning about the world.  This is important because you can’t make sense of words on a page if you have no idea what those words are referring to.  You won’t understand a scene taking place in a grocery store if you’ve never been to a grocery store.  You won’t understand a nature scene if you’ve never been out in nature.  Playing teaches some important reading skills. It teaches you about the physical world, because you are physically doing stuff. It teaches you about human interactions, because you are creating scenarios and living them out.  Playing teaches you to think, because all play requires imagination and initiative and problem-solving.

(If you want to understand the great Maria Montessori vs. Charlotte Mason wrestling match, the missing piece is this: Charlotte Mason’s audience had access to the real world; Maria Montessori’s students were kids who would otherwise have spent their day alone in a tiny working-class flat while their parents put in 14-hour shifts at the local factory.  Much of Montessori is about providing Mason when Mason can’t be had.  At The Register I’ve got up a piece that is an example of that kind of adaptation, in this case for teens.)

I’m still a big believer in homeschooling.  I agree with Ella Frech’s philosophy of education.  For various reasons, though, my kids at the moment like school.  As a homeschooler I always involved my kids in decisions about their education. I’d propose some possibilities for the year ahead, and the kids would give me feedback on what they wanted to learn or which approach they preferred of the choices I put on the table.  I was open to suggestions if they had ideas different than what I was planning.  When I held firm on a curriculum choice, I had solid reasons that I could explain to everyone, kids and spouse alike, and they could see why that particular choice was the one we needed to pursue.

The WaPo article, though, underscores for me why the youngest any child of mine has gone to school was fifth grade — and at that point, she happened to choose our local parish school where the early-grades teachers seem to have a pretty strong grasp of what early-grades learners need.  When you are little, you needs hands-on and interactive experiences.  Homeschooling let us do that.  Inasmuch as I’m happy with the school decisions we have in place right now, it is because the schools are, in their various ways, providing the bigger-kid versions of that for our children.

Anyhow, all this to say: Let your kids play.

Related: On the Forming of Young Christians 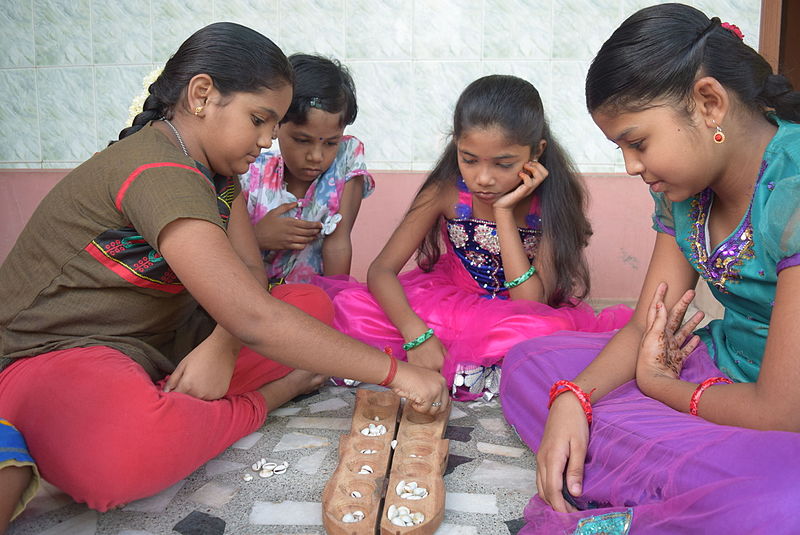 Not my children, but mine play this game too.  Photo by Abi Blu, courtesy of Wikimedia, CC 4.0.