It’s been, oh, thirty-seven years since last I blogged?

Quick recap tonight of what you’ve missed, and then as soon as I finally complete the task that is constantly getting shoved to #2 on my to-do list, presumably blogging resumes.  Since last we spoke:

I had some form of minor plague. No opinion on what it was or wasn’t.  Sore throat, headache, muscle aches, world’s lowest fever that still managed to feel like a fever, mild cough, and award-winning fatigue.

In between? Found myself watching Samurai Cat (loved it in a cult-classic kinda way, until I got tired of waiting for better plot developments), and then Frozen (mmnn, no, wasn’t sick enough yet), and then at the nadir I came to love Twitter, because I had enough energy to hold my phone, but not enough to hold the laptop.  At worst, sitting up even a few minutes was too tiring.

At the worst.  Large parts of the plague were not that bad.  Other than being someone who really, really loved Samurai Cat for a while. Honestly I’m half considering going back sometime and finding out if our hero ever works through his marital problems, or if he’ll just continue to stare moodily at the cat for another season.

My family attempted to run the house without me.  If this were any other year, I might have begged out of chores on the most intently plague-ridden days, and otherwise slogged through the daily grind, albeit with a little more R&R than usual.  Cover that cough but don’t let it keep you from making dinner.

But this is not any other year, so into the designated isolation ward I went.  My people muddled through as best they could, but it turns out I do a few things around this place?  So on the one hand, my convalescence was the most relaxing on record as I was forbidden to get back to work until I finally mounted a rebellion and we all googled probabilities of on-going contagiousness; on the other hand, there was plenty waiting to be remedied when I was finally set free.

Oh look! 300 pages of typos! So I spent a couple weeks digging toward the light at the end of the tunnel, none of it bad, lots of good developments on the construction front, but blogging takes a back seat.  As I was working my way through the catch-up-with-reality list, the proof of The Beast came into my hands.  It turns out that some author we know put many, many, typos into her manuscript.

Also: Splits infinitives.  You may have noticed.

A beloved editor of mine has a ministry of reconciliation, bringing estranged infinitives back into couplehood.  I wish her well.  I do not claim to be cured of my affliction so easily.  Will probably require several more shock-treatments.

FYI for those who are curious, the pink binder on the desk behind Mr. Purrkins contains my marked-up copy of The Beast. 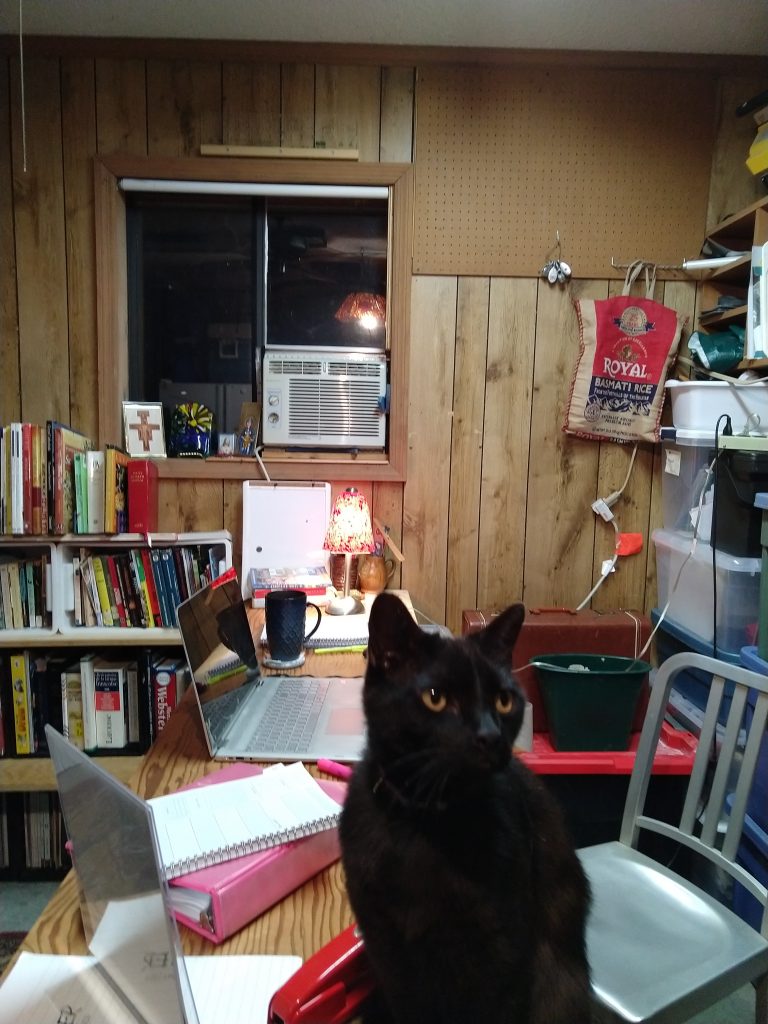 Sorry, no selfie, my camera has apparently given up that work.  Lent must have been too much for it.  I suppose it was for most of us.