Today I was subbing for my daughter’s apologetics class, and thought I’d share the letter I sent home to parents, since it covers topics that come up online a bunch.  You blog readers don’t get to see the whiteboard photo referenced below because it has students’ names on it from a chart we made at the top of the hour, and I’m not smart enough to figure out how to blur them out of the image.  For your viewing pleasure, I’ve posted completely different photos at the bottom.  Close your eyes and imagine a whiteboard of illegible black scrawl instead, and you’ll know everything you need to know.

Attached is the photo of the whiteboard from apologetics at the end of class. Parents, the kids were starting to get the general concepts we went over, but were still having a hard time articulating the key ideas and applying them. It might be helpful for you to have them go through the picture with you and tell you, as best they can, what it is everything refers to. For your convenience I’ve written all the text in slightly illegible lettering so that students have to rely on their memory to fill in the indecipherable bits — you’re welcome.

None of this is in the book, since I was subbing for our regular teacher (Mrs. K) and just working off notes from a different apologetics class I taught a few years ago. But it’s all important stuff and well worth mastering if you enjoy life as a sane person.

Key ideas to draw out of your child:

1) Objective vs. Subjective truth. In apologetics, we need to be able to listen and identify when the person we’re talking with doesn’t understand the difference between unchangeable truths and those facts that are genuinely a matter of opinion, experience, etc. We need to be able to *explain* the difference between subjective and objective facts to friends who don’t realize there is a difference, or don’t realize when they are treating an objective matter as a subjective one. We need to know whether a given statement is a matter of subjective opinion or objective truth.

2) Types of evidence. There are different types of evidence for different types of things. Scientific laws, or laws of nature, are discovered and proven using the assorted tools of science to verify repeatable tests and observations. The facts about historic events and persons are established using the types of evidence that apply to persons and facts. You can’t, for example, do a series of scientific tests to know that Christopher Columbus existed — but you can collect historical evidence for that fact. We need to be able to know, therefore, what *kind* of evidence is suited to proving which kinds of facts. Because God is a Person, and because God acts in history, the types of evidence we are looking for are the sorts of evidence we use for determining historical events and the existence of persons.

In apologetics we need to be able to identify when someone we are listening to has the notion that God is a force of nature that should be subject to scientific evidence, and clarify and explain that God is a person and therefore a different type of evidence is valid. We want to be able to walk our friend through the rational, evidence-based types of proof that one would use in determining whether or not a person exists or an event took place. A useful tool is to walk the person through the types of evidence for or against their own existence.

Not on the board, but an important idea which we discussed in class: Faith is the action of taking the evidence we’ve gathered and using it to come to a conclusion. I can gather all kinds of evidence about the existence of gravity or the existence of Christopher Columbus, but ultimately if I believe in either of those, it is an act of faith. My faith isn’t separate from and certainly not opposing evidence and reason; rather it is the follow-on to gathering evidence and using my reason. Think of it as the third step: Evidence + Reason (logic) + Faith = Belief.

I might be a person who comes to faith easily, requiring very little evidence and logical analysis before I take the leap of faith. For example: I believe in asteroids even though I’ve never had any personal experience with one, and know almost nothing about them. I have an even stronger faith in the existence and power of tornadoes, which I’ve also never seen, because I’ve got even more evidence and experience and knowledge about them — even though all my knowledge is second- or third- hand. Ultimately, though, if I wanted to disbelieve in their existence, I could. Faith is the leap I make to assert that I do in fact believe in these things.

I might, in contrast, be a very skeptical person. Imagine if I decided I would only accept a belief in tornadoes after extensive study and firsthand experience. All the same, even if I were very skeptical, if I’m a rational person there will be some level of evidence that is eventually sufficient to allow me to make the leap of faith and affirm that yes, tornadoes do exist. I can be very skeptical — that is, be a person who requires large amounts of evidence and long periods of logical analysis (reasoning) prior to coming to faith, but still make a decision to affirm or deny a fact. Faith is the act of affirming or denying facts.

[I didn’t use tornadoes or asteroids as examples in class, so that’s new fodder for you in chatting with your child.]

We acknowledged as well, in class, that there are people who simply refuse to accept any level evidence. In class we imagined someone who might, for example, dismiss my (Mrs. Fitz’s) existence, even if they met me in person, on account of how perhaps it was a hallucination, or an actor was paid to pretend to be me, or some other thing. Likewise you could imagine someone explaining away the existence of tornadoes by offering some alternate theory of why they thought they saw a dark whirlwind and heard loud noise right before their possessions were blown away. In apologetics it’s important that we distinguish between someone who is simply looking for more evidence to work through rationally prior to coming to a conclusion, versus those who would never be satisfied with any level of evidence, because they have made a decision in advance about the truth of this or that assertion.

(We didn’t practice this, but a good method for finding out where someone stands on this is just to ask them. Listening is the #1 skill in apologetics.)

Finally, a point that came up in class a couple times is that in apologetics we must be very precise. Please assure your students that in class it’s good to be brave in discussing ideas even if you aren’t sure of the right terms or facts; we will simply pause and clarify definitions as necessary. We learned the word omniscient, and affirmed that none of us humans are omniscient, so it’s okay if you have to acknowledge you don’t know something, and it’s okay if your friends help you clear up any misunderstandings you have.

Eerily apropos photo by: Diego Delso [CC BY-SA 4.0], via Wikimedia Commons
And here’s a tornado, because: I’m a believer.  No tornado-deniers at my house. 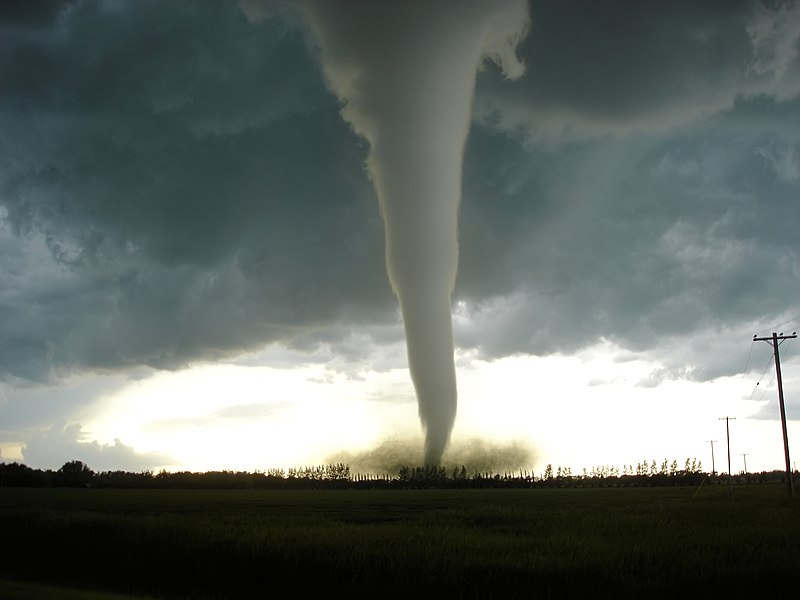