Hathaway’s funeral was perfect.  Chanted Extraordinary Form Requiem Mass at the old but not old-old St. Mary’s church in Aiken, then procession to the graveside for a Melkite burial.  Nothing says “four last things” like a Dies Irae in the hands of a good cantor.

As our line of cars, lights on, hazards flashing, police escort, ambled down US 1 towards the cemetery, traffic of course made way.  But this is a land where funerals are still taken seriously, and even on the four-lane highway where there was no practical need to do so, most vehicles coming the other direction pulled to the side, stopped, and put on their lights, paying their respects.  You have no idea of it, I thought as I passed driver after driver putting life on hold for two minutes of stillness in honor of a complete stranger, but you are witness to the funeral of one of the world’s great men.

John’s daughter asked (shortly after his death) if I could speak at the funeral meal.  After the perfection of the funeral homily and the solemnity of the mass and burial, what I had prepared seemed woefully inadequate.  It also was not very gentle, but fortunately there was a line-up of nice friendly people to follow, including a dear friend with the gift for coming across as a big, chummy teddy bear while he reminded the audience of the value of redemptive suffering and the need for masses and holy hours of reparation.

I’m sure most people did not like what I had to say, but the one person it was written for thanked me for saying it.  Below is the text, with most of the typos removed.

When we try to explain the difference between men and women, we tend to resort to stereotypes.  We know that men possess, on average, more physical strength than women, so we use examples of large, muscular men performing heavy manual labor.  We know that men have an inborn, undeniable vocation as providers and protectors, so we reach for clear examples of those.  When we think of providers, we might give the example of a successful business owner, or an accomplished professional; or we might think of an ordinary workman or farmer putting in long hours at physically grueling labor in order to provide a simple but decent living for even a very large family.  We know that men are created to be protectors of the family and community, and thus we look to the sacrificial life of men who have careers in the military or as law enforcement officers.  These are not bad examples.  But they don’t get to the heart of what it means to be a man.

John Hathaway had the rare and excruciating vocation of showing the world what it means to be a man.

You could not look at John and think “typical big strong muscular man.”  (Though at times he astonished me at how strong he was.)  But what is a man’s strength for?  It is for serving God and serving his family.  John Hathaway used every ounce of his physical strength in fulfilling his vocation as husband, father, and Christian.  I remember him telling me the story of literally crawling to Holy Communion one time, so determined he was to receive Our Lord despite whatever parish he was visiting not noticing he needed the sacrament brought to him in the pew.  John was a wealth of medical knowledge – if I had a difficult medical question, he was on the short list of people I’d go to with such questions – because he was utterly focused on husbanding his strength, as the expression goes, so that he would be as strong as he possibly could be in order to serve his wife, his children, and God.

As a provider, John fell in the terrible predicament of those who are extremely talented but not in financially lucrative ways.  He was an English professor in a nation where adjunct professors sometimes literally live out of their cars because they cannot afford rent.   Many men find themselves in this position, willing to do whatever it takes to provide for their families, but thrust into overwhelming circumstances beyond their control.  The despair this can cause men is at times deadly.

John Hathaway deployed extraordinary determination and perseverance and ingenuity in figuring out, day after day, year after year, how to provide for his family.  And he did provide.  He absolutely embodied what it means for a husband and father to be a provider.

As a protector I want to talk about John’s role in defending his children’s very lives.

We live in a time when it is legally and politically and socially acceptable to say that John and Allie and Gianna and Josef and Clara should simply be killed.  They should never have been allowed to be conceived, for fear they not measure up to some ideal standard of human health.   Allie, the same Allie who has been a pillar of strength and a fount of practical help to Mary over this past harrowing week; the same Allie who is delightfully talented and devoted to sharing her talents with the community . . . is someone that even Christians will sometimes say, “it would have been better if she’d never been born.”

I would say John’s life work was one steady, undying protest against that evil.  He tirelessly spoke and wrote and worked to persuade the world that his children deserve to live.

This vocation of his was painful.  It was physically and spiritually exhausting. He deployed every spiritual and physical weapon at his disposal against the constant and at times overpowering despair and darkness that descended on his life.

I can recall at times literally thanking John for still being alive.  I thanked him for the depths of the agony he endured by dint of continuing to pursue medical care in order that he might, for as long as possible, be present in this life to his family.  I thanked him selfishly: I knew that death would be easier and more pleasant for him, and I knew that when that time came I would feel his absence profoundly.  John was a delightful person to know and to talk to and to be with.

In closing I want to commend Mary for her choice of a husband.  She has faithfully withstood no end of criticism for marrying a man who lacked the superficial traits that are idolized by our society.  But she has known what others don’t see: That she married a man who truly embodied manliness to its fullness.  He cherished her, he sacrificed daily for her and the children, and gave his life and every ounce of his strength to providing for and protecting his family.  He made his own and by extension their relationship with Jesus Christ his number one priority.  He was everything any man could ever aspire to be. 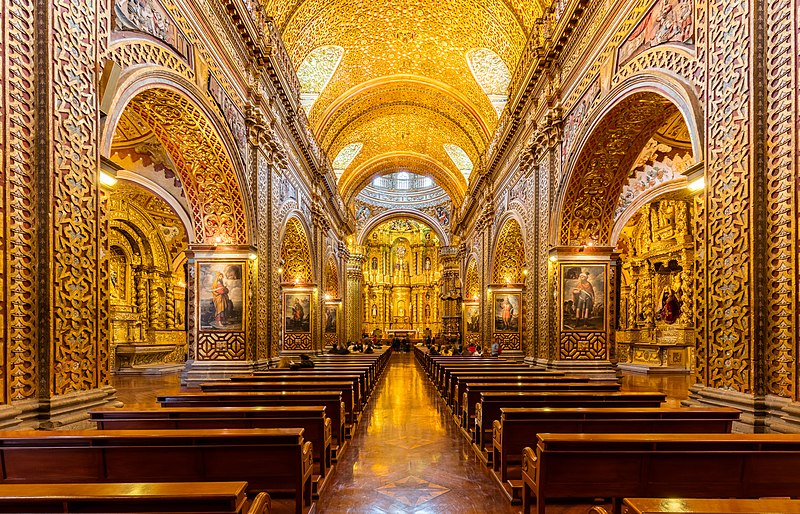 The pale and fleeting beauty of the Shadowlands, as seen in the Jesuit church in Quito, Ecuador. Photo by Diego Delso, delso.photo, License CC-BY-SA.