While I was out on the Epic Vacation, Mrs. Darwin came back from the Trying to Say God conference and put me on the list of “interesting Catholic women out there, who could not be described as liturgical cupcakes, who don’t need to take antagonism with the Church as an essential starting place.”  She has a good list, and I could add to it, all of them ladies I’d buy a cup of coffee any day, just to be able to sit down and hear what they have to say.

Throughout the talk, I wondered if the new standard to which Catholic Women’s Writing was being held was any less restrictive than the old one, whatever that is. Edginess and Pain has replaced Mommy Blogging, but if you don’t prefer to be either edgy and painful or to write about the The Three Graces I Obtained In The Grocery Aisle, what is there? Can women, even boring women who have a lot of kids, write about ideas, or just life? Is it necessary to prove our woman bona fides by talking about our clitoris and our orgasms and our vaginas, as some panelists seemed to think was a biological imperative?

. . .  Writing the truth about pain, or fear, or brokenness is valid because the human experience encompasses these states. Writing about our bodies is valid because every human life is shaped by the body and its glories and its limitations. But these aren’t the only ways to write, even for Catholic women, and they’re not even always the most interesting ways to write. It’s okay to just write about a topic unrelated to sex (or not-sex) or relationship (or not-relationship). It’s okay to be a woman and write without referencing being a woman. The category of womanhood is bigger than any one box, even once all the liturgical cupcakes have been consumed.

In the combox, a reader writes:

This is what I aspire to. I wonder if anyone touched on the marketability factor. There’s a lot of pressure, for bloggers on paid platforms, to be Pinnable, Perennial, or Controversial. That pressure doesn’t mean there’s no audience for other kinds of writing, but other kinds of writing don’t multiply clicks the same way.

There’s some truth to this.  There are a variety of strategies for successful blogging and other types of publishing, but ultimately neither servers nor paper pay for themselves.  If you write for a publisher of any kind, your work has to draw enough readers to keep the publisher alive.  If you are writing independently, you’ve got to pay the bills and feed yourself.

That said, pull a writer from Mrs. D’s list: Amy Welborn.  Professional female Catholic writer whose work covers a whole lot of interesting stuff, and none of it falls into the false dichotomy concerning our supposed slots as Tigers or Cupcakes.

Adding to the list: Kathy Schiffer and Elizabeth Scalia are both accomplished journalists who will take on who needs taking on, but don’t need to wimper about The Patriarchy in order to do it.  (Scalia haunts the whole spectrum — Aleteia runs both cupcake and tiger work as slivers of their massive Catholic pizza.  She, personally, is closest to Peggy Noonan in her essays, and something like if Knox took his gloves off in her books.)

Simcha Fisher, I guess she’s her own special category in Catholic publishing, but she’s support-a-family-doing-this marketable, and yes she writes on controversial topics, we all do, but she doesn’t write off anyone else’s script.  She writes what she sees.

Like Mrs. Darwin, I’m just throwing out a few names who’ve been in front of my face today.  The point is this: Being marketable as a writer doesn’t require you to fit a particular mold.  If you take a look at any given mold, you see a few people excelling and a lot of copycats spewing miserable drivel that no one really reads.  It makes the category seem larger than it really is.  The single common factor among writers who make a living at writing is that they all put in the work it takes to do this as a career.

What is it you hope to get out of being published?

I think sometimes when people go to a conference and complain about how All The Big Writers Are XYZ, what they mean is, “I can’t get famous enough because people don’t appreciate my greatness.”  That’s a good way of thinking if you’d like to make yourself obnoxious or suicidal, but it’s no way to be a Catholic.

There are loads of reasons not to write.  I practice those reasons with unsettling skill. 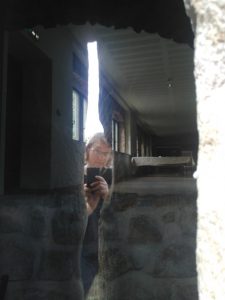