Last day of February, and because it’s a leap year we get one extra day of Black History Month.  This year I’ve been enjoying @Menny_Thoughts daily posts on Black Catholic history. (He blogs here.) The bulk of the mini-biographies he shared were familiar names to me, but not over-familiar by any stretch, and there were quite a few new-to-me stories, at least one of which made me briefly jealous I hadn’t included it in my array of saints for the book.

The thing that bugs me every year, though, is the implicit question when you set aside a specia- month-for-special-people: What about the other 11/12ths of the year?  Goes for womens’ history too, and don’t get me started on that one.

It’s a question I asked myself at the start of the month, and now that I’ve had twenty-nine days to think about it, here are three reasons I think Black History Month is important.

#1 Sooner or later you discover there’s more to Black History than MLK and Harriet Tubman.

Start there by all means.  Those are need-to-know stories.  But if enough years of enough days go by, eventually you start digging into lesser-known luminaries.  This is important because of something a friend of mine said way back in high school.

The topic was a television show neither of us watched much.  I found the characters one-dimensional, the plots predictable, and the dialog stilted.  His complaint: “There’s that character who is supposed to be the spoiled rich girl from the elite family, but there’s no such thing as black people like that.”

I instinctively knew he was wrong?  But I had no evidence with which to make my case.

My friend was not alone. What we learned about African-American history in school consisted of slave, slave, slave, slave, emancipation, Jim Crow, MLK, and then somehow magically you are surrounded by all these black professionals you encounter in daily life, but actually black people are mostly poor and helpless and need social workers to save them? (Always them.)  And also there’s that guy who made the pottery.

Thus even though it’s fantastically dumb that we need such a thing, it’s good that we eventually get so bored of the same half-dozen African-American figures getting shared around every February that we start to uncover, bit by bit, that there’s a whole lot more to know.  And it’s interesting.

White people can get uncomfortable admitting to an interest in Black History.  It’s like if you’re white you are contractually obligated to either have an Official Reason to study such a thing, or else you must use the word “vibrant” to gush about those special special people who are just as good as you — honest! even better! — because of course they are so vibrant. 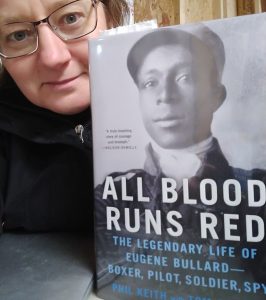 Actually we know this is true, because look at our daily penitential photo.  That’s me posing with the cover of All Blood Runs Red: The Legendary Life of Eugene Bullard — Boxer, Pilot, Solider, Spy. You’ll notice that Eugene Ballard looks a little skeptical on his cover photo.  He’s totally thinking: Why do I have to pose with this white lady I don’t even know?

Or maybe he’s thinking: Why yes, I am a World War I flying ace, thank you very much.

(I can’t promise you the book’s any good, but the dogfight sequence in the prologue made it well worth the trouble of grabbing it off the new books shelf at the library today. Looks promising.)

You don’t need an official reason to study this or that type of history.  If you feel like you have to explain yourself because you take an interest in the actions or language or heritage of people who aren’t part of your officially-designated special-interest group? Then you need to give yourself some desensitization therapy.

#3 You deserve to be well-educated.

By way of example: If you are a teacher in any capacity, you owe it to yourself to read Up from Slavery.

Yes indeed, it is a massive fundraising letter (missionaries take note, if you need ideas).  Yes it’s also one of those things you need to read in order to claim to be knowledgeable of African-American history (I make no such claim — I’m strictly an amateur). But if you are a teacher?  Booker T. Washington happens to have written a practical philosophy of education that is far more useful than the bulk of the pedagogical blather that gets shoved at education majors.

If you want to learn the art of rhetoric from a master of the English language, read Martin Luther King, Jr.  If you want to learn how to be a saint during an epidemic in a city with neighborhoods under quarantine, read the life of Venerable Pierre Toussaint.

Black History is human history.  You might show up for some other reason, but you stay because you found something of enduring value.