Unless you want to be taken for a ride.

A long ride up a windy mountain road, and then back again by a different way, with a stop for photos in a picturesque village because it isn’t fair that the children get to take all the photos out their windows while I keep my eyes on the road, so humor me we are going to stop and park so the mother can get out and take pictures . . .

Eventually we did end up in Katzenthal (also picturesque), home of the Château de Wineck.  FYI, Wikipedia seems confused about this castle, in both French and English.  The place we visited, as you’ll see, is the one I’ve linked to — hit the Google translate button and scroll down for some history.

I’m not sure whether I would have marched myself up the hill or not, but a tired child dug her heels in at yet another evening-after-a-long-day castle hike, so the two of us walked the other siblings as far as the trail at the edge of the village, then ambled back towards our car.  We were halfway across the village when the two hiking children raced back and intercepted us excitedly: “There’s a road!  We can drive up!”

Foolishly, I believed them.

We loaded up and headed towards where I’d left them.  The “road” begins with a teeny-tiny alley between two buildings, ample for pedestrians and more than sufficient for those narrow tractors that the farmers drive through the vinyards, but not the sort of place Americans drive automobiles.  Warnings from the rental contract flashed in my head.

Conveniently, I have rented a French car.  It knows the way French drivers behave, and so it has sensors that beep ruthlessly at you if you get anywhere even vaguely French-like in your parking habits.  I really wanted to see this castle.  Possibly an addiction is forming.  So I sucked in my gut (as if that would help) and thought French thoughts, and threaded the needle.

No furious beeping.  No scratches for the rental car guy to charge to my credit card.  Apparently it is a road.

Except that the “road” never turned back into a full-sized road.   As we wound our way up, I grew increasingly suspicious that I was on a private road belonging to the vinyard owner.  Also: I wanted to see that castle, and anyway there was no place to turn around.  So up we drove, and sure enough there was a wide spot for parking right at the castle, and that, too, was probably meant for castle custodians and not for us, but the place was empty because it was late, so if we were supposed to get in trouble the villagers were slacking off on that job.

The remains of Wineck are small – here’s the keep and tower.  You can go inside on the occasional opening hours, but we declined to trespass (we’re like that — our ambiguous vehicle situation not withstanding). 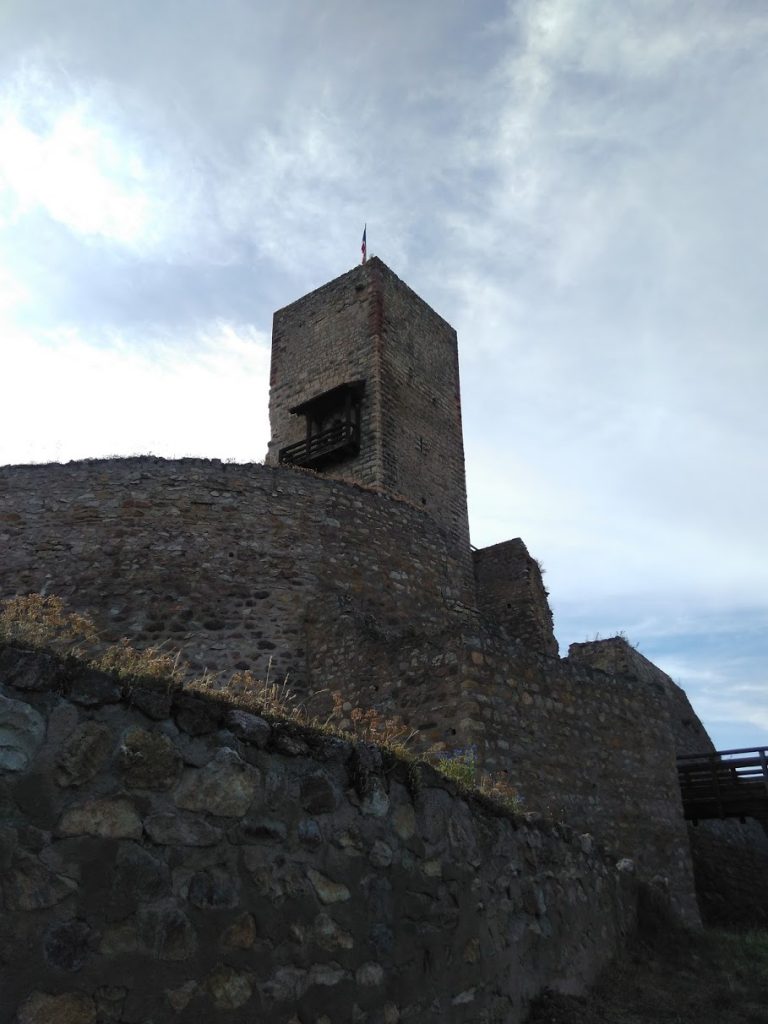 Here’s a detail from one of the walls at the base of the structure: 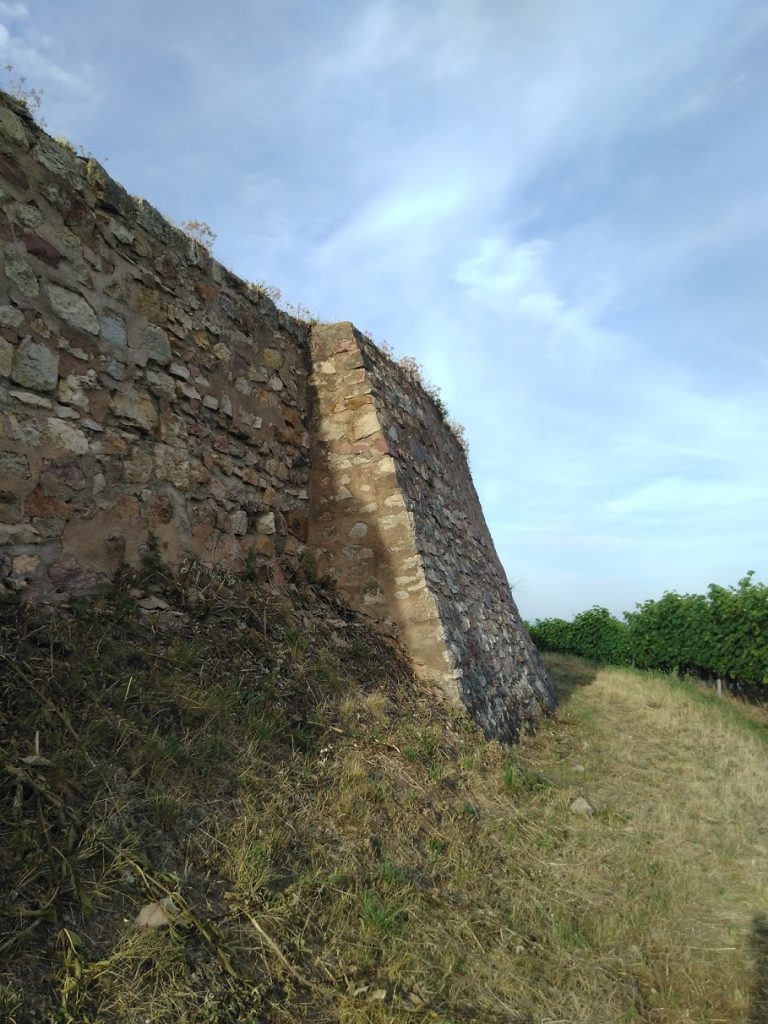 And here’s a wall cross-section: 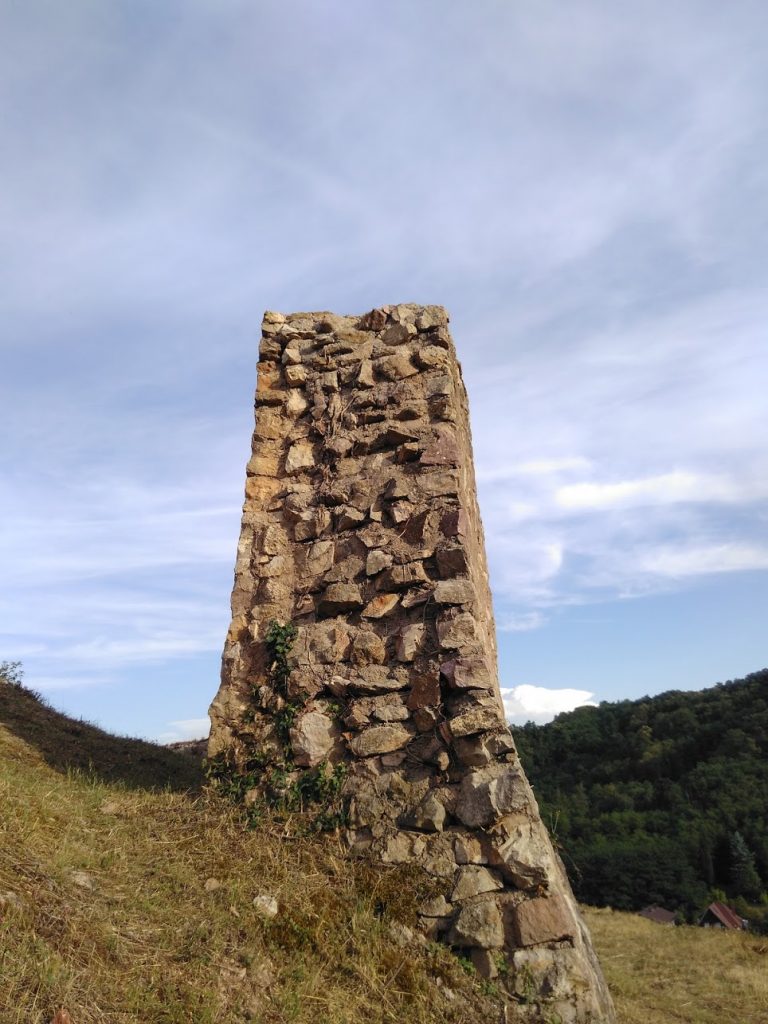 There are some slight but distinct differences, you’ll note, between this wall cross-section and the cross-section of wall from the Eguisheim castles in Part 2 of this series.  If you are just joining us on the castle tour, Part 1 is here.  The last thing I  have planned for the  (Alsatian) castle series is a look at the furnishings in Haut Koenigsbourg, coming next.