So Saturday the internet went out, and here’s what happened next:  Mr. Boy, now officially all graduated and legal and I guess technically Mr. Young Man, says to my husband, “Would you like me to clean the house, or would you like me to get on the phone with AT&T and get our service fixed?”

Now he does not have superhuman powers, so it still took until Tuesday for AT&T to actually show up.  But they did, and the friendly service guy, who is not at fault for AT&T’s corporate lapses, worked with Mr. Young Man to figure out what had happened and get it fixed.  (It was them not us . . . my IT  Man would have fixed it if it were us.)

Here is another thing that happened on Saturday: My 16-year-old and I got into a huge fight about the state of our front yard, eventually came to a truce-type-moment, and she proceeded to carry out a massive landscaping renovation.  First thing Monday she phone around to mulch dealers, got the best price on pinestraw, calculated how much she’d need, drove the truck (and I drove the other truck) out to pick it up, loaded the truck with a bazillion bales of pinestraw, and came home and made our yard look 10,000 times better . . . and then pressured-washed the driveway. 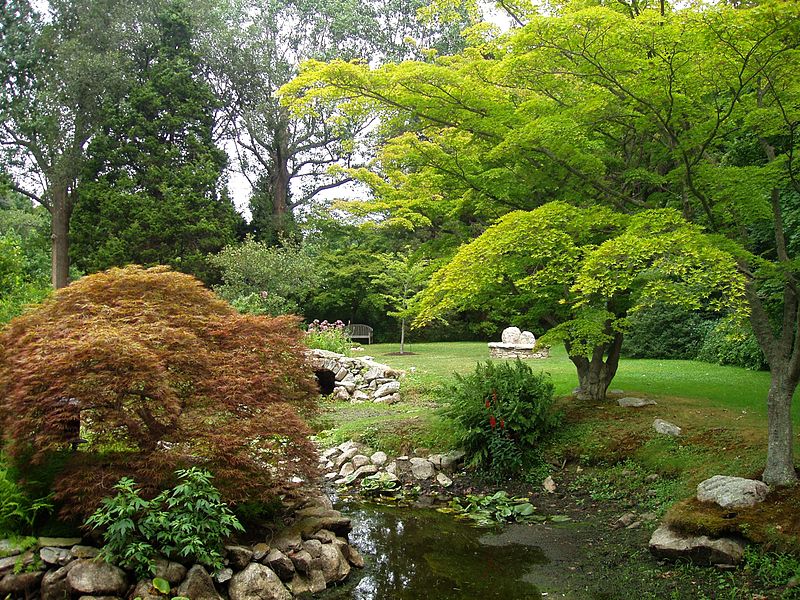 Our yard Before & After, as visualized by Wikimedia.  [Public Domain and CC 3.0  Daderot at en.wikipedia respectively.]

So how do you get yourself some teenagers who are able to take the initiative and do responsible things?

By letting them take the initiative and learn to do responsible things.

For the boy, I’d say the turning point was letting him unschool 7th grade science.  Every day he was required to read or do some kind of science thing, and make a note of what that was.   I knew I could count on him to educate himself in that area, and indeed he did. Mostly he read technology websites that year.  In later years we bought him computer pieces for his birthday or Christmas when he wanted to build or re-build a computer.  By spring of 12th grade he’d landed his first regular IT job.  He’s 18 and pretty much already has a profession, because we let him do the thing he was interested in.  We didn’t send him to lessons or anything complicated.  We let him experiment and take risks and just do the thing.  There was a lot of trial-and-error involved, but it was his trial, not ours, and now he knows how to avoid the errors.

I’ve already documented some of E.’s artful adventures.  Note that nearly all the things from this beautiful backyard patio area have now been moved around for other decorating needs.   Having a child who can paint means never knowing where your paintbrushes are (except when they are left sitting by the kitchen sink).  The reason the girl is confident she can take on a front-yard renovation is because she’s been let loose with the weed-whacker and the leaf-blower and the pressure-washer many times before, even though she doesn’t always do it the way I wish she would.  (See: Bitter Argument Saturday Morning, Why Did You Chop Down That Oak Sapling?)

Now notice here that my IT guy did not help with the lawn.  Note that my lawn girl did not lift a finger to fix the internet (shout-out to the grandparents who pay for her data plan . . . she had internet while I didn’t, ha.)  There will come a time when they are older and they’ll have to take on a certain number of big projects that they don’t particularly care to do.  At 16 & 18, a realistic expectation is that your kids will go big and deep on the things that are most important to them.

But that’s a good start.  If they learn in their teens that they can take an interest in something, master all the skills, and be turning out professional-grade work as a result?  I think that’s about where they need to be.

So parents,  if you are terrified of the mess your kids are going to make, or you are tempted to over-program and over-schedule their lives, or you worry that your kids aren’t “well-rounded” because they tend to focus mostly on one or two types of interests and not ALL THE THINGS, relax.

Set a few boundaries, sure.  But mostly: Just let your kids do things.