I went on a brief social media fast for a personal intention, and, magic!, finished a book.  Go figure.  The book was On Killing: The Psychological Cost of Learning to Kill in War and Society, by Dave Grossman.

It is the first book I’ve read on the topic (and I lack any pertinent firsthand experience), so I’m not knowledgeable enough to critically assess.  I did check the reviews and there seem to be a fair number of combat veterans who found the book to be on point.

I can tell you, caveat lector, that the author spirals through his arguments and evidence as the chapters progress, though I think at least some of that repetition is an essential part of laying out his thesis.  Personally I found it helpful to have him recall for me information I read previously that was needed again as he moved on to a new topic that built on previous concepts, though I did eventually wish he’d pull out some new data to freshen up with.

I can also tell you that this is not a book to read if you, for whatever reason, don’t need to be putting unvarnished descriptions of deadly violence into your head.

He concludes his book with a final section on civilian violence, which is a sobering bit of opinion-piece worthy of consideration, but not the primary point of my posting this review.

More pressing today: If you are puzzling over police violence, the information throughout the book pretty much answers your questions about what types of training and circumstances increase the likelihood of police brutality, and what types of training and circumstances would increase the likelihood of minimal use of force and increased use of deescalating techniques.

It seems to me that our present problem with police gratuitously killing civilians does not come from nowhere.  Possibly there are even handy infographics throughout the book to assist in reminding you how to cut down on all the bloodshed?

***
Dave Grossman is not a moral theologian, so plan to bring your own critical thinking skills to the book. But if you wish to understand how one might hope to curb police brutality, the info is there. 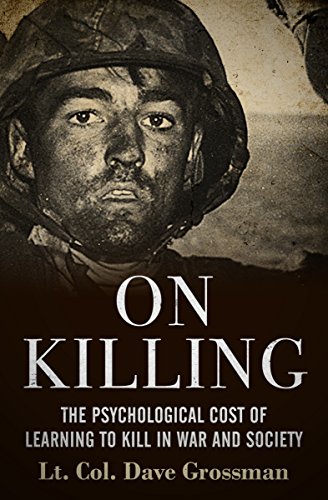